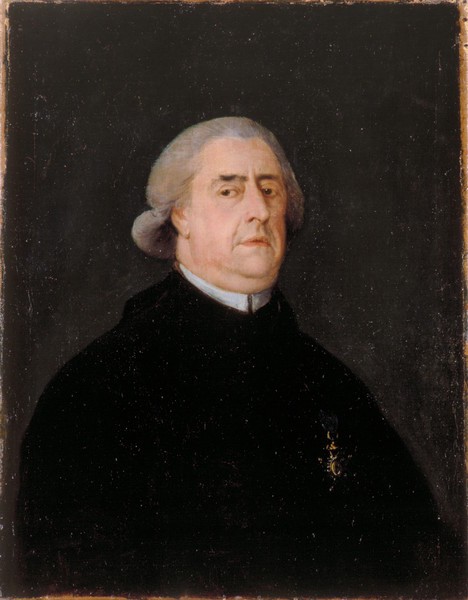 This painting belonged to Martín Zapater and was inherited by his grand-nephew Francisco Zapater y Gómez, from whom Valentín Carderera purchased it for the Duke and Duchess of Villahermosa.

Ramón Pignatelli Aragón y Moncayo (Zaragoza, 1734-1793), second son of the Count and Countess of Fuentes, was destined for a life in the clergy. He completed his doctorate in Canon Law at the University of Zaragoza, where he was rector. Canon of the Metropolitan Chapter of Zaragoza, instigator and defender of the Imperial Canal of Aragón, he was also one of the founders - together with other ilustrados - of Zaragoza's Royal Economic Society of Friends of the Country.

This slightly more than bust-length portrait shows the subject against a dark, neutral background. He is wearing a wig, a black dress coat and a clerical collar. Worn proudly on his chest is the Cross of the Royal Order of Charles III.

It is thought to be a finished study made from life for a full-length work, the whereabouts of which are now unknown, which belonged to the subject's family, the Count and Countess of Fuentes. A replica of this other work is thought to have been made for the Imperial Canal, but appears to have been lost during the Spanish War of Independence. Several copies were made of the full-length portrait, including the one by Alejandro de la Cruz (late 18th century, Diputación Provincial de Zaragoza) and the one to replace that which was destroyed. Narciso Lalana was commissioned to make the latter in 1821, and it is now stored in the Museum of Zaragoza on behalf of the Imperial Canal of Aragón. Some writers consider this to be the original work by Goya, repainted by Lalana.

Some smaller copies also exist, such as the one which belonged to Zaragoza's scholar and writer Hilarión Gimeno y Fernández-Vizarra (now in a private collection).