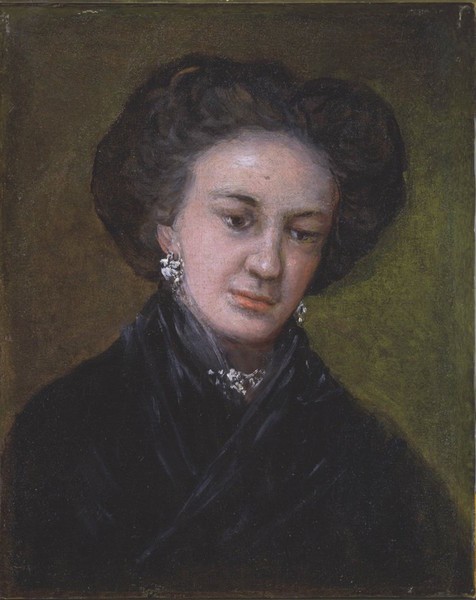 In 1818, Mariano Goya found a number of works by his grandfather that had been hidden in a wardrobe. Among these works was this one, A portrait of the actress Rita-Luna from the time of Moratín (Un retrato de la Rita-Luna actriz del tiempo de Moratín), obviously painted sometime before 1818. Mariano, aware of Valentín Carderera's passion for collecting and willing to sell off Goya's estate, wrote a letter to Carderera in Huesca attaching a list of all of the pieces of interest that had been found, along with the price that he was asking for them. Carderera bought the lot.

This portrait later belonged to the collection of the Count of Oliva. It subsequently entered the Kimbell Art Museum in Fort Worth, Texas. In January 2007 it was acquired by a private collector at an auction held at Sotheby's in New York.

Rita Luna García (Malaga, 1770-Madrid, 1832) was a famous stage actress, the daughter of comical actors. She was at one time considered the greatest actress of her time, much to the dismay of her rival, María del Rosario Fernández, "La Tirana", whose portrait Goya also painted. She retired from the stage at the peak of her professional success, in 1806. Her final years were spent at the royal palace of El Pardo, where, according to Viñaza, this portrait was made, and where she carried out numerous charitable acts.

Here, Goya was not painting the famous actress in her moment of glory but rather the woman when she was older and living a quiet life. The bust portrait is dominated by the actress' sad, melancholy face. Her down-turned head is covered by a black shawl. She is depicted as an elegant señora, adorned with earrings and necklace and with her hair carefully styled. But all these details are eclipsed by the sorrow in her face.

The Count of La Viñaza mentions another portrait, of an unknown gentleman, made by Goya on canvas and affixed by the painter himself to a board so as to make a companion piece to that of Rita Luna. The man it depicts is probably also an actor.