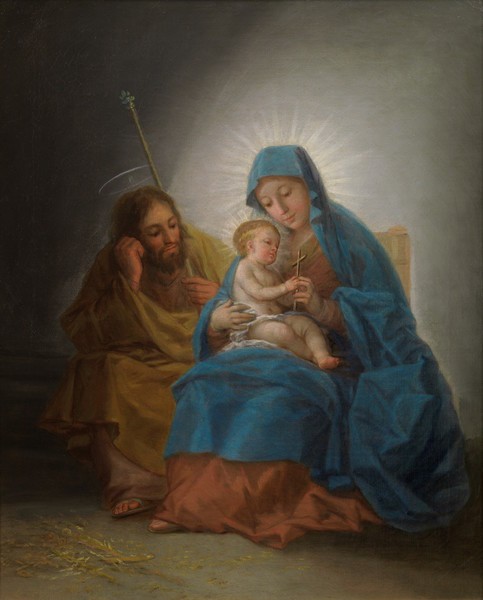 This work was acquired by the Ministry of Development by Royal Order of 16 April 1877, at a price of 2,000 pesetas paid to Manuel Chaves y Loisa, and was entrusted to the Prado Museum five days later.

This work is difficult to date due to its singular characteristics, and there are different opinions on the matter. Carderera believes that this might be a piece known to have this theme painted by Goya for the Duke of Noblejas during the last years of his life, but this does not seem possible given the fact that this rather classicist style does not fit in with the work Goya was creating at that time. Camón agrees with Buendía in dating the work at around 1774-1775. Morales observes echoes of the artist's Zaragoza period in this work, and finds similarities between it and Triple Generation. The most fitting period for this work seems to be the 1780s, during which Goya produced other classicist compositions influenced by Mengs. In fact, the figure of Jesus is executed in a similar style to that used by the neoclassicist for children in his paintings. Moreover, Goya has also employed blue and red in the Virgin's attire, colours which brought figures closer to the viewer, according to Mengs.

The scene shows Joseph, Mary, Jesus, and the Infant Saint John arranged in a pyramidal composition. The treatment of light is close to that of its companion work, unpublished until recently, Tobias and the Archangel Raphael and Holy Family whose black backgrounds are lit by a light which seems to emanate from the figures themselves.