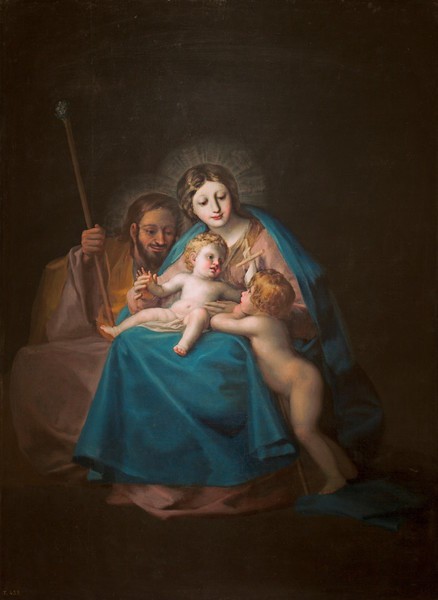 This painting is paired with Tobias and the Angel, which is of the same style and size. Both belonged to a private collection in Madrid from the middle of the 19th century to the beginning of the 21st, when they were discovered and attributed to Goya by Richard de Willermin. They went to auction at auction house Alcalá Subastas on 8 May 2003 (lot numbers 41 and 42), and were bought by the Spanish Government to be placed in the Prado Museum in the same year.

Goya represents the three members of the Holy Family in Joseph's carpentry workshop, as can be seen from the wood shavings on the floor. The Christ Child is playing with a crucifix, a gesture which is a premonition of his death. Mary's virginity is accentuated by the presence of the blue mantle which dominates the pyramidal composition.

As in the case of its companion painting, Goya has made an almost scientific study of light, and the rays are distributed throughout the surface of the canvas, illuminating the humble setting for this family scene. The light emanates from a single point - in this case mother and child - and is diffused outwards.

Manuela Mena has suggested that Goya's inspiration for his Christ, who is represented with great tenderness and shows a strong bond with his mother, was the last of his sons, Javier, born in 1784. The scene, which indeed has a strongly intimate character, goes beyond a mere cold and orthodox religious image, imbibed with a sense of serenity and intimacy.

(For more information on the discovery of these two works and their meaning, see Tobias and the Archangel Raphael).