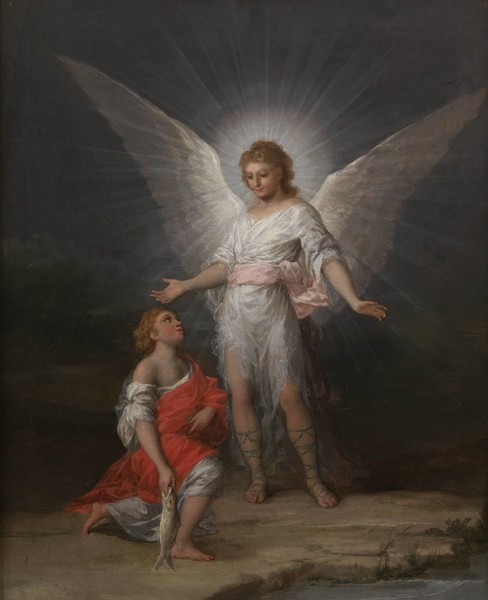 This painting is paired with a Holy Family, which is of the same style and size. Both belonged to a private collection in Madrid from the middle of the 19th century to the beginning of the 21st, when they were discovered and attributed to Goya by Richard de Willermin. They went to auction at auction house Alcalá Subastas on 8 May 2003 (lot numbers 41 and 42), and were bought by the Spanish Government to be placed in the Prado Museum in the same year.

Until they were discovered to be works by Goya, these were considered to be devotional paintings from the 19th century. The reason for this error was that specialists did not think that Goya would have been interested in this genre. However, there are various known works which he painted for private clients who requested small devotional pieces. The high quality of the work, the models used for the figures, very similar to those of the paintings for the Convent of Santa Ana in Valladolid, and the techniques employed leave no room for doubt that these are authentic works by Goya.

The level of the finish of these pieces denotes the interest with which Goya executed these paintings, most probably destined for a patron with whom he had a close relationship.

It is not unusual for the subject of the painting recorded here to be paired with the Holy Family, linking the Old and New Testaments. Tobias, who married the virgin Sarah, is often linked to Saint Joseph. His figure is a precursor of Christ, representing salvation. The Archangel Raphael is associated with medicine and the healing of children in particular, and for this reason he was a subject which was often requested by merchants who sent their children away to study far from the family home. Perhaps this was the profession of the person who commissioned the painting.

According to the corresponding passage of the Bible, the scene takes place in the evening. Tobias and Raphael have stopped by the Sea of Galilee where Tobias catches the fish that will cure his father's blindness. Goya, as good academic, read up on the subject and chose this particular moment for his painting. The sky is getting dark, and the light - almost daylight - which radiates from the head of the archangel is the only source of light. The rays of light emanate outwards, leaving lines in the sky. It is likely that Goya based his work on the writings of the Jesuit Rafael de Bonafé, who published a pious work on the archangel in the 17th century which spoke of the angel's sun-like beauty. Raphael responds to this idealized, Apollinian model. His white clothing and the pink of the cloth around his waist are as delicate as the gesture he makes with his arms, and the gaze he fixes on his companion. The small figure of Tobias, on one knee with a fish in his hand, is notable for the vivid red of his mantle.

It is striking that two works by Goya from the same period can be so different. This image, so angelic and harmonious, in tune with the classical canon, contrasts sharply with Saint Francis Borgia Assisting a Dying Man, which displays a remarkable and uncontained expressionism.