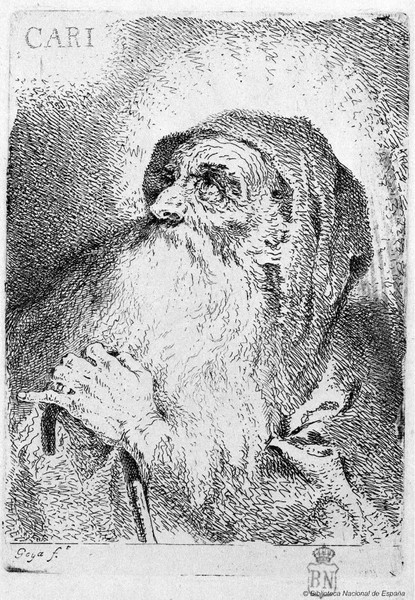 This preparatory drawing for the etching with the same title was stored at the Jovellanos Institute in Gijón and was destroyed during the Spanish Civil War. Only a photograph of it remains.

The preparatory drawing for this work was identical to the etchings that have survived to the present day. The saint is shown turning to one side and looking upwards, holding a cane in one hand. His luxuriant beard immediately seizes the viewer's attention, as does the halo that surrounds his face, since both elements stand out as bold areas of white where the paper has been allowed to show through. At the top of the drawing Goya has written "CARI", an abbreviation of "Caritas", Latin for charity, just like in the copper plate made afterwards.

The close correspondence between the drawing and the final etching shows that, when he sketched out the drawing, the artist already had a reasonably clear idea of how the printed image would be arranged, and he introduces fewer modifications here than in the other etching in this same series, Saint Isidore the Labourer, for which we also have a preliminary drawing.

The sketch for the etching of Saint Francis of Paola has been linked to page 114r of Goya's Italian Sketchbook. These comparisons may stem from the fact that both images appear to be influenced by the paintings of José de Ribera (Xátiva, Valencia, 1591-Naples, 1652) and even by certain works by Luca Giordano (Naples, 1634-Naples, 1705). However, the drawing from the Italian Sketchbook should not be interpreted as a study for the sketch and subsequent engraving described here. Instead, the subject that sketched Goya in his taccuino were the tears of Saint Peter, perhaps a study for the painting of the same name which he made between 1818 and 1825.