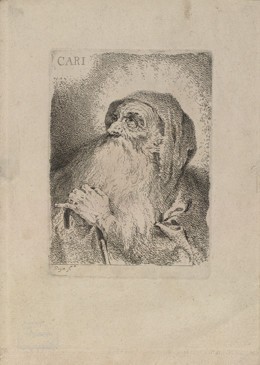 There exist some early state proofs and small print runs in which the inscription "CARI" is reversed, a mistake which Goya corrected in the finished plate.

Saint Francis of Paola is shown with his face turned to one side, although not quite in profile. His head is covered with a cloth, his eyes are looking upwards, and standing out from his wrinkled face are a prominent nose and full beard, which covers much of his chest. In one hand he holds a cane. Goya has built up the dark background with short and continuous horizontal lines, giving shape to the saint's halo, which is left in white, just like his beard. The tunic covering his head and body is rendered using the same regular, tightly-packed lines. This technique denotes an increased skill in the use of etching than that previously displayed by the artist, but also an increased reserve.

Goya's decision to depict this saint could be related to the birth of his son in 1780, who was baptized Francisco de Paula Antonio Benito. What is more, when Goya's daughter was born in 1782, he gave her the name Francisca de Paula. It could be said therefore that the artist felt a particular devotion for this saint and that this etching could have been executed sometime between the years 1780 and 1782, coinciding with these events within his personal life.

Although it is true that in this piece Goya demonstrates just how well he knew the work of José de Ribera (Xàtiva, Valencia, 1591-Naples, 1652), we must also consider the influence of the work of Giovanni Domenico Tiepolo (Zianigo, Venice, 1727-Venice, 1804). Specifically, parallels can be drawn between Goya's Saint Francis of Paola and Tiepolo's Saint Joseph and the Christ Child, made between 1760 and 1770. Such a comparison focuses on the way in which short, horizontal lines are used to create the figure's clothing, as well as the way in which some parts of the paper are left bare, generating an interesting contrast between light and shade and contributing to the illusion of volume.

It is likely that Goya's work was also inspired by the engraving by Miguel Gamborrino (1760-1828) of the same title, Saint Francis of Paola (National Chalcography Museum, from the collection of Antonio Correa, Madrid), in which the expression on the saint's face, the tunic covering his head, and his luxuriant beard all bear a certain resemblance to the etching by Goya.

The etching plate is conserved in the National Chalcography Museum, having been acquired in 1792 (cat. 155).