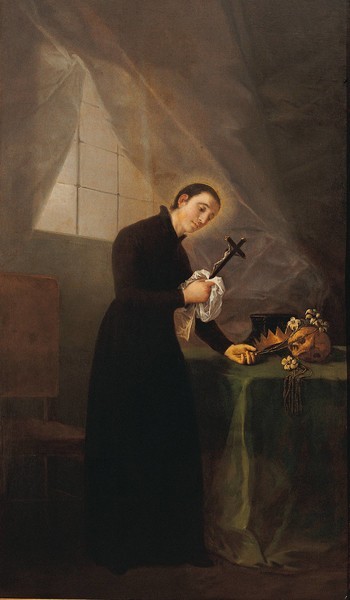 This painting comes from one of the altars of the Convent Church of las Salesas Nuevas in Madrid. Elías Tormo attributed this painting to Esteve, but María Gómez Moreno in her notes for a new edition of Tormo's articles in Las Iglesias del Antiguo Madrid, maintained the traditional attribution to Goya and provided relevant information about the precedence of the piece and its history. Gudiol confirmed Goya's authorship in 1979.

The nuns of the convent sold the work to Luis Morueco, an antiquarian from Madrid, following the Spanish Civil War. The Government of Aragón purchased it from the antiques firm Antigüedades Luis Morueco in 1991, entrusting it to the Museum of Zaragoza.

The image is painted on a ground containing earth pigments from Seville, which is visible in some areas as it shows through the glazes applied. The artist also used opaque layers of paint to create luminous effects with a very austere palette.

The Jesuit saint and Italian noble, who renounced the Marquesate of Castilione when he entered the Company of Jesus, is depicted in his study, He was a page of honour in the court of Philip II between 1581 and 1584. In this painting, he is standing next to a table with his symbolic objects on it: the Madonna lilies of chastity, the crown symbolizing the title he renounced, a skull and a cilice, representing asceticism, and the crucifix he holds in his hand with a white cloth signifying purity on which his gaze is fixed. These objects are depicted with thicker brushstrokes, bringing them into the foreground. The saint is wearing the dark habit of the Jesuits, which has a sense of volume achieved thanks to the glazes applied to the black tones.

The composition and treatment of light are reminiscent of Saint Francis Borgia Assisting a Dying Man in which Goya also uses a curtain in the background which shades the light entering through the window. The use of these curtains for a theatrical effect, which reached the height of its popularity in the baroque period, gives the scene a mysterious air, as well as controlling the light and allowing a rich range of shading. The composition is simple yet noble. The style of the painting is very close to the neoclassical, reminiscent of the works Goya painted for the Convent of Santa Ana de Valladolid.

The date of this work varies according to the author. In the end, all authors agree that the work must have been completed between 1798 and 1800 as proposed by José Luis Morales y Marín and Arturo Ansón, since the convent was built in 1798 and the decoration must have been carried out in the following years.

The painting underwent two restorations by the hand of Francisco Recasens when it was acquired by Luis Morueco, as it had suffered much damage during the Spanish Civil War.

In 1975 it was restored once more at the Amatller Institute of Hispanic Art in Barcelona.