The healthy and the sick (Sanos y enfermos) 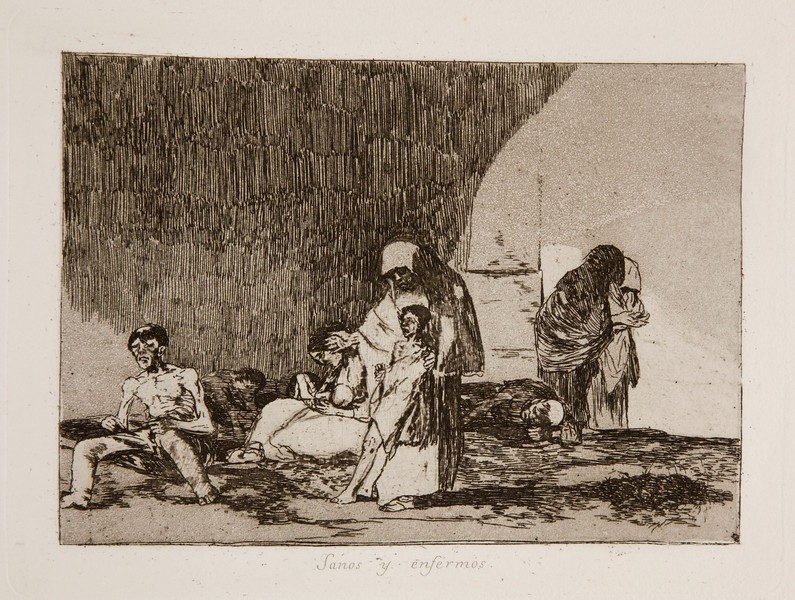 5 (on the lower left-hand corner of the plate).

In this image Goya continues to explore the consequences of the famine that devastated Spain during the Spanish War of Independence. In the centre of the composition a woman wearing a cloak holds onto a young boy by the shoulder. The woman, who is extremely thin, is covered with a paltry garment that accentuates her scrawny physique. It is possible that she is suffering from lathyrism, which would explain why she cannot maintain a standing posture. This illness, which was especially serious for children, was caused by an excessive consumption of grass pea, which was used as a substitute for wheat in bread and for making soups.

On the left is another figure seated on the ground. His bare chest allows the viewer to see all his ribs. Behind the woman and child in the foreground is a young woman sitting down with a newborn baby on her lap. In the background, a figure turned slightly to the right is stretched out on the floor, either exhausted by hunger or unable to stand due to the effects of lathyrism. Also in the background are the silhouettes of two completely shrouded figures, a device Goya employed in various prints in the Disasters of War series.

The scene seems to be taking place under a wide arch which shelters the figures, perhaps in the street. This type of wide arch was employed by the artist on numerous occasions, such as Prison Interior (Interior de una prisión) and Children Playing Bullfighting (Niños jugando a los toros) to give but a few examples. This device is also used in prints no. 11, Neither do these (Ni por esas) and no. 13, Bitter to be present (Amarga presencia), both from the Disasters of War series.

Juan Carrete believes that this print can be read in two ways, since the adjective "healthy" was used by both supporters of Bonaparte and patriots to describe these opposing sides within the Spanish nation.

The plate is stored in the National Chalcography (cat. 308).