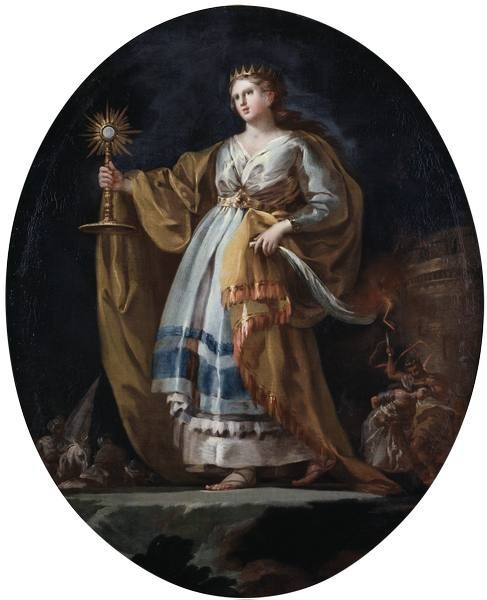 This painting entered the collection of Juan Molina in 1932. It subsequently belonged to the Torelló Collection in Barcelona before it was acquired by the Prado Museum in 2001.

Saint Barbara appears in this work as a monumental figure. She is pictured on a raised surface and is dressed in very elaborate attire, executed with bright, intense brushstrokes which foreshadow the technique which Goya would employ for clothing in female portraits some years later. The patron saint of armies invoked against storms is depicted with her traditional symbols - the palm and the martyr's crown - and is holding a monstrance bearing the Sacred Heart. On the right hand side in the background, the immense tower in which Barbara was held captive looms over the depiction of the saint's martyrdom. She is about to be beheaded by her own father, Dioscorus, who is subsequently struck dead by a ray of lightning. On the left hand side in the background, the composition features some horsemen carrying a standard.

The canvas is oval in shape. The saint's features are in line the classicist style of the images Goya painted at the Monastery of Aula Dei in Zaragoza, as well as those of the vault of the choir in the Basilica del Pilar in Zaragoza. There are clear links between this depiction of the saint and the classical sculpture Juno Cesi, admired by Michelangelo as the most beautiful artwork in all of Rome, which Goya was able to see on his trip to Italy. In fact, he sketched the head of this work in his Italian Sketchbook in which he also drew the figure of Saint Barbara in sanguine, a fact which confirms Goya's authorship of this work. The painting's date is confirmed by the same source, since Goya wrote the date 15 September 1773 on the next page, the day of his marriage to Josefa Bayeu. From this we can deduce that the piece dates from around this time, which fits with its stylistic similarities to the Aula Dei works (ca. 1774). This painting presents us with a classicist model adapted to rococo tastes, as in the case of other works by Goya from the same period. Apart from these characteristics, the painting also displays a stylistic link with the painting Goya entered into the competition held by the Royal Academy of Fine Arts of Parma, Hannibal the Conqueror, Viewing Italy for the First Time from the Alps, above all in the group in the background on the left.

It has been suggested that this Saint Barbara has something to do with the new stage of his life which the artist began with his move from Zaragoza to Madrid with his family to work at the Royal Tapestry Factory of Santa Bárbara.

This work has a reddish priming layer, and has been relined.