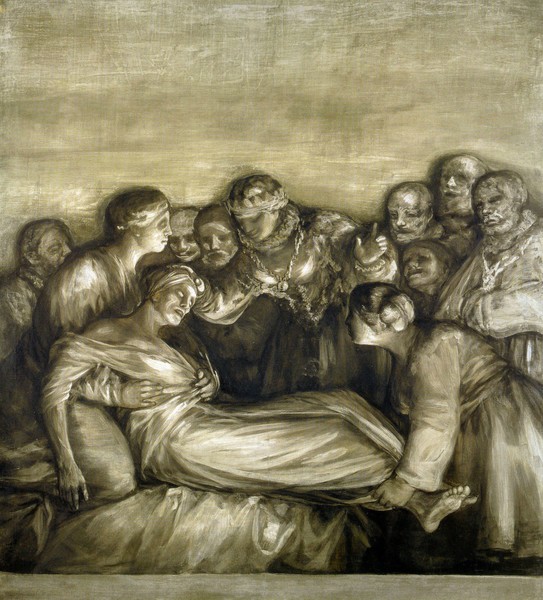 This work is one of a set of six grisailles produced in 1816 by various artists as overdoors to decorate the queen's bedroom in the Royal Palace in Madrid following the second marriage of Ferdinand VII to Princess María Isabel de Braganza y Borbón (29 September 1816). The artists who worked on the commission along with Goya were Vicente López (who painted two pieces), Zacarías González Velázquez, José Camarón Meliá, and José Aparicio. The subjects of all the overdoors were related to "historical events of the monarchy", as in the case of Saint Elizabeth of Portugal, the queen's namesake. It was the last commission Goya received as court painter.

On the death of Ferdinand VII, Vicente López recorded the six grisailles in the 1834 inventory of the king's possessions, valuing them at 7,500 reales each. When the room was dismantled and transformed into a dining hall in 1879, they were removed and put into storage in a vault of the Royal Palace.

In 1959 the researcher Paulina Junquera published the discovery of a work by Goya conserved in the same Royal Palace (Palacio del Oriente).

The composition of the image takes the form of a frieze. The sick woman lies in a supine position, emphasizing the horizontal, while the other figures are gathered around her. At the centre we find Saint Elizabeth in her regal attire, resting her hand on the head of the sick woman and leaning towards her. The linear composition, the strong profile of some figures and the sculptural moulding offered by the grisaille technique give the painting a near neoclassical feel, although the pathos of the faces and the sketchy forms belong to the most anti-classicist current in Goya's art. It shows some similarities with the sketch on the same subject carried out for the paintings of the Church of San Fernando de Torrero in Zaragoza, which features less figures, but in which Saint Elizabeth is depicted in a similar way.

Another important parallel can be drawn with Goya's sketch for the tomb of the Duchess of Alba.