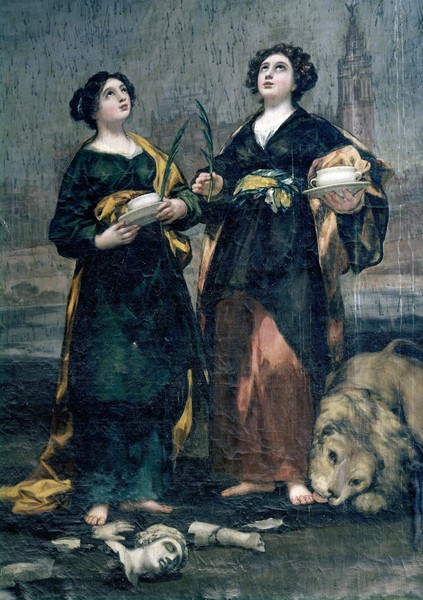 The Metropolitan Chapter of Seville Cathedral commissioned this work to Goya thanks to the mediation of the scholar and friend of the artist, Ceán Bermúdez. The painting's underdrawing was already sketched out by 27 September 1817. The painting was delivered on 14 January 1818. Goya received payment of 28,000 reales for this canvas, which is still housed in the Sacristy of the Chalices of Seville Cathedral.

The period when this painting was produced was not the happiest in Goya's life. The painter was now 71 years old, and Vicente López held back many of his commissions due the conservative reaction they were met with: the Maja paintings appeared in the list of objects belonging to Godoy confiscated by the Inquisition for being "obscene". It was probably for this reason that Goya's friend Ceán intervened to get him this commission, supervising it down to the last detail, deciding what would be depicted, and even demanding three or four preparatory sketches of which one still survives (Prado Museum, Madrid).

As Ceán wrote in a letter to Tomás de Veri, a collector from Mallorca, the chapter had requested a painting of the martyrdom of the saints; however, given the size of the canvas Ceán thought that it would be better to represent the saints life-size, in decorous postures which would not distract the priest and would move the faithful to prayer.

Thus, the sisters appear standing up, carrying their traditional objects: ceramic pots denoting their profession as potters, and the lion by Saint Rufina's side which refers to the moment when the Roman prefect Diogenianus threw her to the lions. The lion in the amphitheatre became as tame as a house cat, licking the feet of the young woman. Both women towards the dark sky lit only by two rays which illuminate their heads. In the background we can see the Giralda Tower which usually appears in representations of the saints, symbolizing their native city. The painter included a pagan sculpture in pieces at their feet, referring to the occasion when the saints destroyed the image of the Syrian goddess Salambo, refusing to sell one of their vessels as an offering to the deity.

Despite Ceán's praise, the painting was not well received by the people of Seville - above all by local artists, who felt that Goya had stolen a good commission from them. As a result, a battle began between the defenders of the painting and its detractors, and both sides expressed their point of view by means of poems and couplets which spread throughout Seville. They went so far as to claim that Goya had used two prostitutes as models for the painting, a popular belief which was even propagated by academics such as Yriarte, who was convinced of Goya's scepticism.

Other Goya scholars did not value the canvas because did not correspond with his true style and force of character, apparently carried out with the sole objective of pleasing the chapter. Nevertheless, modern critics have been able to appreciate the difficulty of the commission. The canvas had to include various attributes, and Goya carried out a great deal of research to depict them adequately, visiting Seville three times. The result is a canvas which fuses black tones and bright colours in the style of El Greco. The painter doubtless based the composition on a work of the same subject by Murillo (Fine Arts Museum in Seville).