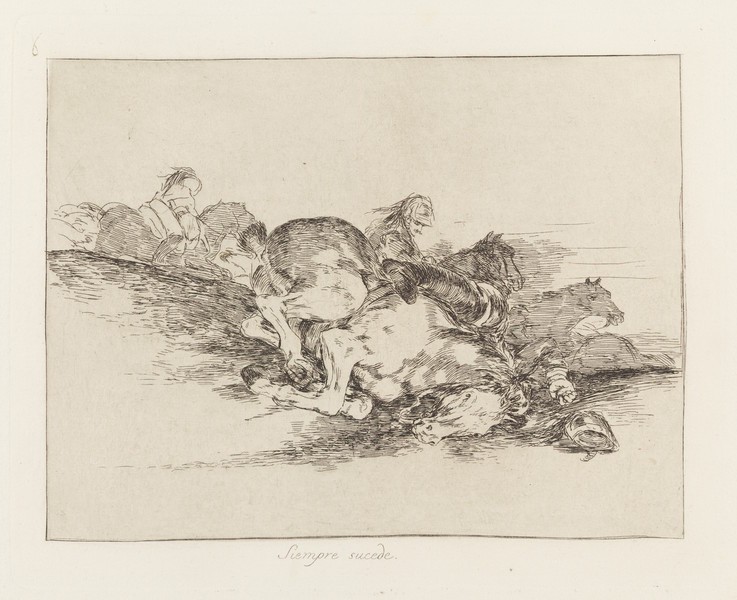 There exist two state proofs of this print, one before the numbering and the drypoint work was added, and the other with the number etched on to the plate and some touches of light added in drypoint to the saddle of the horse, in the background on the left-hand side.

There is a preparatory drawing in the Prado Museum

This always happens depicts either a charge or a retreat by dragoons of the French Imperial Guard. This was the name given to those soldiers who, from the second half of the 16th century to the beginning of the 19th, fought in the cavalry, normally on the offensive, and as defensive infantry.

In the foreground, Goya shows a fallen horse and its rider, who is largely hidden by the animal, with only one hand and a leg visible to the viewer. In the middle ground several other riders flee on horseback. It is likely that in this print the artist has created a generic representation of the way in which the French soldiers passed through the Spanish cities, since it seems that they did so at full gallop, using the element of surprise.

The action in the scene is concentrated in the centre of the composition, framed by the white of the untouched paper. The horses and their riders, galloping at great speed, have been rendered using etched horizontal lines, packed very tightly together. On the other hand, Goya has left large areas of white on the body of the fallen horse, drawing our eye to it. This is a dynamic, energetic image, thanks chiefly to the diagonal lines of the falling animal and rider and to the quick continuous horizontal strokes, somewhat longer than is usual in these prints, which have been used to depict the rest of the horses.

Eleanor Sayre has established a relationship between this etching and the prints belonging to the third part of the Disasters of War series, the Emphatic Caprices, by virtue of the way in which Goya works in these images. The horse shown here in This always happens displays strong similarities to the animal in print no. 78, He defends himself well. The two depictions represent the same animal in two utterly different postures: in the first print, the horse is falling helplessly; whilst in the second it has become an animal full of energy, lashing out and defending itself with virulence. Both animals occupy the centre of their respective compositions - a large white shape in the middle of each etching.

The present print is one of the most complex in the series and is difficult to connect to the others in this first part of the Disasters of War. It is just as challenging a task to make sense of the image using the title that Goya has given it. Perhaps it is a metaphor for the defeat that always comes in the end, inexorably, just when it is least expected, as symbolized here by the falling of the horse.

The etching plate is conserved in the National Chalcography Museum (cat. 259)