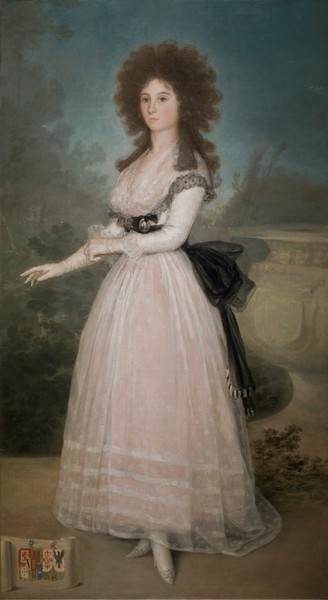 The commission for this portrait may have been the fruit of the close friendship between the sitter's first husband, Tomás de León, and the Duke and Duchess of Osuna. With the pair of crests in the bottom left-hand corner having been identified as those of the two houses of Arias and León, it is feasible that the portrait was made for the first betrothal of the sitter, in 1789. According to Viñaza, Goya received 10,000 reales for this work.

The painting was inherited by the sitter's son in 1855. In 1876 it went to the sitter's grandchildren, who donated it to the Prado Museum in July 1896.

Tadea Arias de Enríquez (1770-1855) is depicted in this full-length portrait in an open space, wearing a long dress made of gauze, with long sleeves, in which Goya plays with the transparency of the layers, the folds and the lacework. A wide black ribbon covers her waist and ends in a broad bow at her back. Poking out from the bottom of the dress are her shoes, decorated with silver buckles. She appears to be putting on the glove of her right hand with a movement of her left. Her head is adorned with a spectacular wig of dark curls, stylizing even further the figure of this woman whose beautiful, although slightly inexpressive face, makes us think that Goya may not have known her very well. This would explain why he is unable to show us much of her personality, as the painter often did in his portraits.