Not this time either (Tampoco) 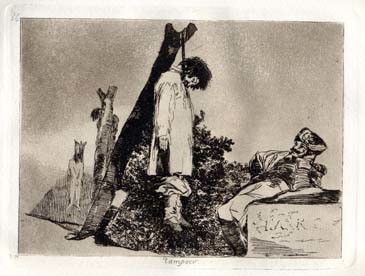 39 (on the lower left-hand corner)

The title was originally printed as Tan poco, although there are no surviving copies bearing this title as it was modified, erasing the n and writing the m in its place which is maintained in the definitive title.

A Polish soldier sits calmly resting his head on his hand, contemplating the corpse of a hanged Spanish man with a serene, almost proud expression. The trousers of the dead man have fallen to his knees because his belt has been used in his own execution. Behind him there are other tree trunks from which more corpses are hung. As recorded by some travellers at the time, the dead bodies of hanged men were sometimes left hanging in the trees as a clear example to others.

Goya makes interesting use of aquatint in this work, leaving the central section of the print in white in order to highlight the line of trees and hanged men, perhaps suggesting that it continues beyond the compositional space.

Polish soldiers were employed in the French troops as they were famous for their merciless, bloodthirsty nature and coldness when confronting the enemy. Goya captures this is the print, depicting in great detail the face of the soldier who contemplates his macabre work with pleasure.

Despite the fact that the garrotte had replaced all other methods of execution from October 1809 onwards, it was common for French soldiers to hang Spaniards who were found in possession of a weapon. It was a quick execution method that avoided the bureaucratic processes associated with the death penalty by garrotte to which prisoners were supposed to be subjected.

Nature once again is complicit in the scene of violence and horror: the tree trunks on which the Spaniards are hanged seem dry, lifeless and capable of taking the lives of others.

The title of the print expresses the painter's perplexity: as in the case of print no. 34, On account of a knife (Por una navaja) the artist once again cannot explain to himself the brutality and inhumanity of the act he depicts. Similarly, in print no. 35 Goya underlines the banal nature of blame by plainly stating that One can't tell why (No se puede saber por qué).

This work shows that the artist was familiar with the work The Great Miseries of War (Les Grands Misères de la guerre) by Jacques Callot (Nancy, 1592 - Nancy, 1635) and in particular print no. 11, entitled The Hanging (La Pendaison). It shows a large tree in the centre of the composition from which numerous corpses hang, executed before the eyes of the army and the people. However, Goya varies the scale in his work, bringing the viewer closer to the figures so that we can see their faces and be moved by the atrocity of this act.

The plate is stored in the National Chalcography (cat. 287).