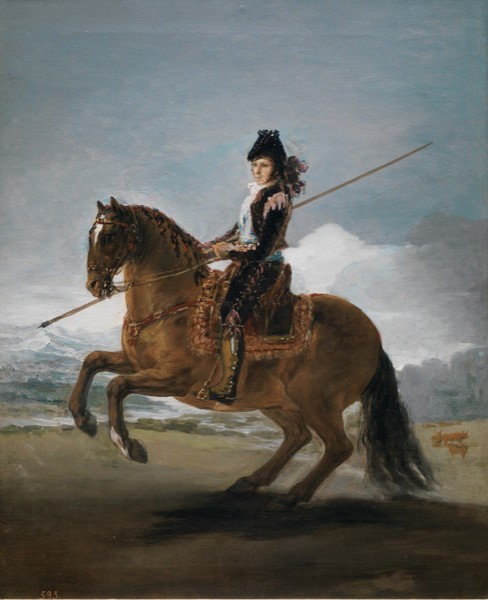 This work came from the Royal Collection.

Whilst the work was undergoing a comprehensive clean in 1987, it was discovered that underneath this portrait of a bullfighting picador there was hidden an equestrian portrait of a young Manuel Godoy (1767-1851). Clearly identifiable are the facial features, the sash of the Order of Charles III, awarded to Godoy in 1791, and the three-cornered hat of Commander of the Lifeguards, a title he received when he was named Duke of Alcudia, in 1792. The artist responsible for the over-painting is not known, but this work may date from around 1808, coinciding with Godoy's fall from grace, which led to several portraits of the royal favourite being destroyed.

The picador, his body shown in profile but his head turned towards the viewer, wears a short bullfighting suit and hat and carries a long pike. He is riding a prancing horse in front of a landscape with a river. In terms of its composition and atmospheric qualities, the work recalls the equestrian portraits painted by Velázquez for the grand hall of the Palace of Buen Retiro in 1630.