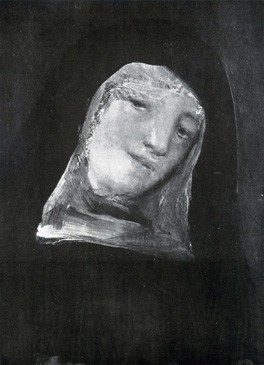 Monogram of the Infante Sebastián Gabriel, formed by the crowned initials S and G (on the back).

This work came from the collection of Agnews and Son, in London.

It shows a bust portrait of a nun, dressed in a habit. The most striking element in the composition is the figure's face.

Gudiol states that Goya's use of textures is very unusual, both in this portrait and in its companion piece, A Friar. In this work, the textures do indeed take on particular importance in the area of the black habit worn by the nun. The apparently unfinished brushstrokes verge on an expressionistic technique.

According to Gassier, Goya's last works, this one included, were characterised by the artist's use of broad but at times unsteady brushstrokes, which gave these paintings a very moving intensity.