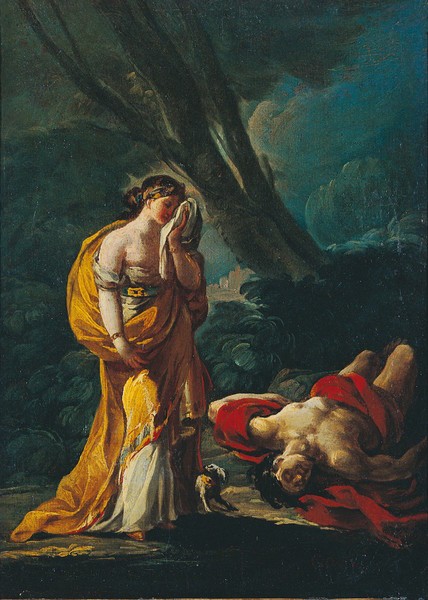 This work was produced during Goya's stay in Italy. Desparmet Fitz-Gerald published four previously unpublished works from the artist's youth, amongst which we find this work, interpreted by the Frenchman as depicting Daphnis and Chloe.

The work formed part of private collections in Bayonne and Zurich. It later travelled to North America. It was acquired by the Government of Aragón in 1999, and entrusted to the Museum of Zaragoza.

This piece is an example of a particular kind of painting which Goya produced and sold in Italy to cover his living costs. They are small pictures adapted to the tastes of specific clients. (For more information on this kind of work, see Sacrifice to Vesta).

Both the sale and the execution of these works were rapid, as can be seen from the x-ray of this painting, which does not show a single alteration. The scene depicts Venus, weeping inconsolably by the dead body of her lover, the beautiful Adonis, who has been killed by a wild boar.

The composition is clearly divided into two separate areas by the diagonal line established by the trunk of the tree. There is a strong contrast between the background, which is characterized by typically baroque dark tones and a tempestuous sky, and the figures in the foreground, which are illuminated and dressed in very bright colours. Adonis' anatomy reflects Goya's increased interest in classical sculpture, also reflected in the notes written in his Italian Sketchbook.