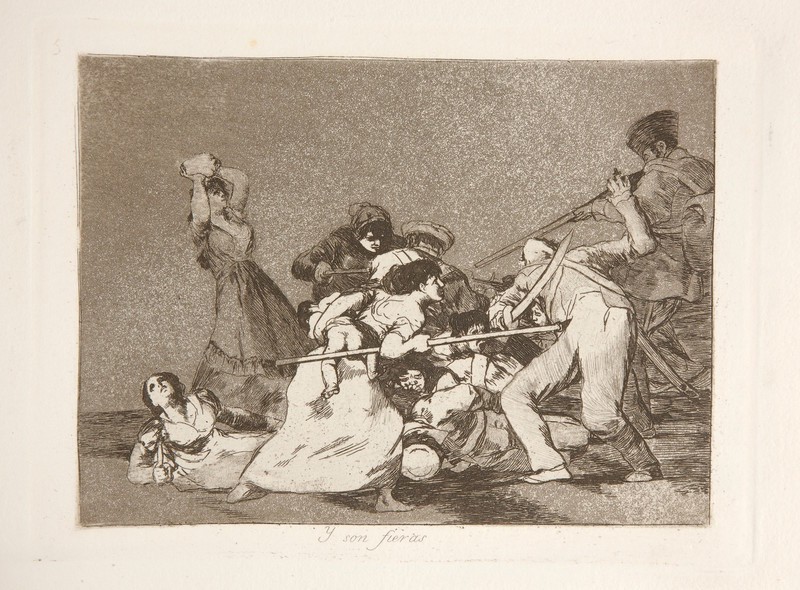 In the second state proof we can see where the burnisher has been used on the upper part of the plate, on the body of the speared soldier and on the right thigh of the woman lying off to the left-hand side. Drypoint has been applied on the trousers of the speared soldier in the foreground. This state proof was made before the lettering was added and the additional aquatint was applied.

There exists another state proof, with the number 5 already engraved, in which the aquatint has been removed from the edges apart from in a small area at the bottom.

In the foreground, a woman, with a child held under one arm, drives a spear into a soldier, mortally wounding him. Beside her, and slightly further back, another woman is lying on the ground, with a dagger clasped in one hand. In the middle ground, several figures are entangled in a vicious struggle on the ground: off to one side a soldier, shown in profile, takes aim with his rifle; a woman stabs a sword into a French soldier; and another holds a large stone over her head, ready to hurl it.

Just as in print no. 4, The women give courage, here Goya has used diagonal lines in the composition to produce a strong sensation of instability and movement. Only the prone woman, the woman on the left who is about to throw the stone, and the soldier aiming his gun on the right-hand side contribute any kind of stability to the scene, constituting a sort of parenthesis that serves to mark the edges of the situation. It is difficult to make out against whom the figures at the back are fighting. It almost seems as if they are all fighting against one another, as if they form part of the same wild mob, driven by a fervent, irrational violence.

Here aquatint has been used more moderately, with less intensity than in the previous print. The background is somewhat paler and the white surface of the two figures in the foreground helps to emphasize their importance.

Looking beyond the prevailing chaos of this image, Goya sets out to remind us of the prominence of women in the struggle, of their ferocity. Here, in And are like wild beasts, he continues with the theme of women's role in war that he began in print no. 4, The women give courage. In addition, the presence of the half-naked child, which the woman in the foreground carries under her arm, brings to mind the biblical story of the slaughter of the innocents.

The etching plate is conserved in the National Chalcography Museum (cat. 256).