There is no more time (Ya no hai tiempo) 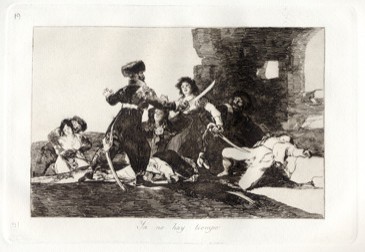 We can see how a correction was made to the title, adding the letter ‘y' where an ‘i' had probably been engraved initially.

A group of Mamluk soldiers has caught a group of Spaniards by surprise. One of these has been killed whilst trying to defend the women accompanying them. Another Spaniard is about to be murdered with a sword, but the woman in the centre of the composition has grabbed hold of the Mamluk's hand in an attempt to stop him. In this same moment, the woman faces another of the attackers, his back to the viewer, whilst the woman next to her, who is somewhat older, has put her hands together to beg for mercy. In the background, another woman has been seized by a third Turkish soldier. But whatever he had planned for her will no longer occur, since the Mamluk who has his back turned to us is raising his hands as if to say, just as in the etching's title, "There is no more time". Something has forced the Turkish soldiers to leave.

On this occasion, the women appear to have been lucky and to have escaped the brutal violence to which women are subjected in so many other etchings in the Disasters of War series.

The etching plate is conserved in the National Chalcography Museum (cat. 270)