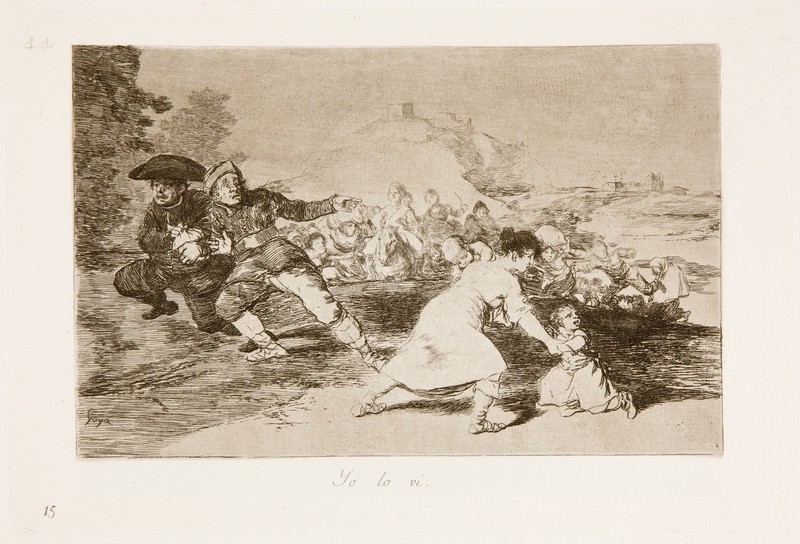 The first artist's proof shows that Goya used drypoint for the figures in the background, the woman and child in the foreground, and the hat and hand of the figure to the left of these. The overbitten etched areas in the figure of the man on the far left of the print have been reinforced with burin.

A group of people is depicted fleeing in panic in broad daylight over a waste ground on the outskirts of the city or town visible on top of some hills in the background. The print shows an assortment of different figures, both common people and religious men, some of whom have had time to gather up some of their belongings. On the left-hand side of the print we can see a priest wearing a saturno hat who is clutching a bag as he flees with an expression of terror on his face. Next to this figure is another man who points behind him, possibly because he has seen a situation that requires help. The plea seems to fall on deaf ears as the priest grips the man by the arm, forcing him to continue on his way. In the centre of the foreground Goya depicts a woman taking the arm of a child who looks back and seems to resist leaving his home. The female figure carries a smaller child in her other arm. In the background is a group of people fleeing the scene, some on horseback.

This image may in fact capture a relatively common practice in times of war: that of abandoning towns in order to avoid the raids of French troops. Thus, the enemy could take the supplies they needed from the abandoned towns without inflicting harm on the inhabitants.

This print can be linked to the preceding works in the series - no. 41, They escape through the flames (Escapan entre las llamas); no. 42, Everything is topsy-turvy (Todo va revuelto); and no. 43, This too (Tambien esto) - which all deal with people fleeing a place for various reasons. Goya presents the viewer with a group of images that display a certain consistency of theme, making it possible to identify a distinct set of works within the first part of this print series specifically dedicated to the theme of war.

Thus, it is also possible to establish a second link - albeit for different reasons - between this print and the following, no. 45, And this too (Y esto tambien). It is exclusively in the case of these two prints that Goya emphasises he was a witness to the events taking place. The artist's need to emphasise his presence at these two events leads the viewer to the conclusion that he was, perhaps, not a witness to the other images depicted in the series.