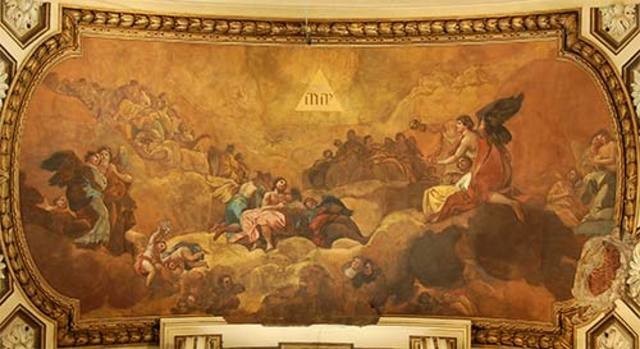 The Metropolitan Chapter of Zaragoza was interested in commissioning a fresco painting for the vault of the chapel commonly known as the Coreto or choir located opposite the Holy Chapel of the Pillar. The Chapter considered the possibility of giving the commission to Goya, who had recently returned to Zaragoza following his travels in Italy. In a session held on 21 October 1771 the Building Committee of the Chapter agreed on the following: "For the painting to be located in the vault of the choir, in the space shown in the drawing by Don Ventura [Rodríguez, architect of the Holy Chapel] Goya will produce the sketches: if they are worthy of the approval of the Royal Academy [of San Fernando] we will agree the terms." In the meeting held on 11 November it was reported that Goya "had painted a fresco painting as a sample and proof that he had experience in this sort of painting, and that it had merited the approval of the academy members." They offered Goya a total of 15,000 reales de vellón for the work, including labour and materials. An alternative quote was put forward by Antonio González Velázquez to the value of 25,000 reales, but the Board confirmed that the commission would be awarded to Goya with the following condition: "In order to proceed correctly and with certainty, [Goya] must provide some sketches representing the Glory and submit these to the Court for approval by the Academy; this being obtained, the terms will be agreed and the contract signed." According to the minutes of a meeting held on 27 January 1772: "Goya presented the sketch for the painting that will decorate the vault of the Choir, the gentlemen having already been informed of its being a skilful piece of with good taste; the Committee approved the work and, in spite of the agreement made in the previous Board meeting that the work should be submitted to the Royal Academy for approval, the Board pronounced that the work should begin, a contract being drawn up beforehand by the Administrator." On the following day Goya signed the contract and on 31 January he was paid a first instalment of 5,000 reales (265 libras, 12 sueldos and 8 dineros); on 30 March he received the second instalment (200 libras) and on 31 July 1772 he received the third and final payment (331 libras, 5 sueldos). On 1 June, the canon and Building Committee Administrator, Matías Allué, informed the Committee that the works were almost been completed.

The triangle of the Trinity dominates the set of images that comprise the upper central section of the vault, in the best position to be viewed from the outside of the Coreto. A host of young angels and putti are interspersed with the clouds, venerating the symbol of the trinity and distributed in the space in the form of a cross within the generally turbulent sky. Within the central group of angels below the trinity our attention is drawn to the figure carrying a music manuscript, the emblem of celestial choirs. On the right-hand side a second group features a great angel thurifer who is swinging the censer, next to another angel reclining on the cloud. On the left there are two angels in standing poses who sing softly to each other, prefiguring the natural poses of the angels depicted in the Chapel of San Antonio de la Florida.

The painting has a rectangular frame with sides finished with stilted arches that fit the shallow curve of the vault.

The colour scheme is characterized by the yellowish ochres typically used to represent the heavenly light, as well as other tones of yellow, strong pinks and intense blues which, aided by the chiaroscuro, give life to the painting.