To the cemetery (Al cementerio) 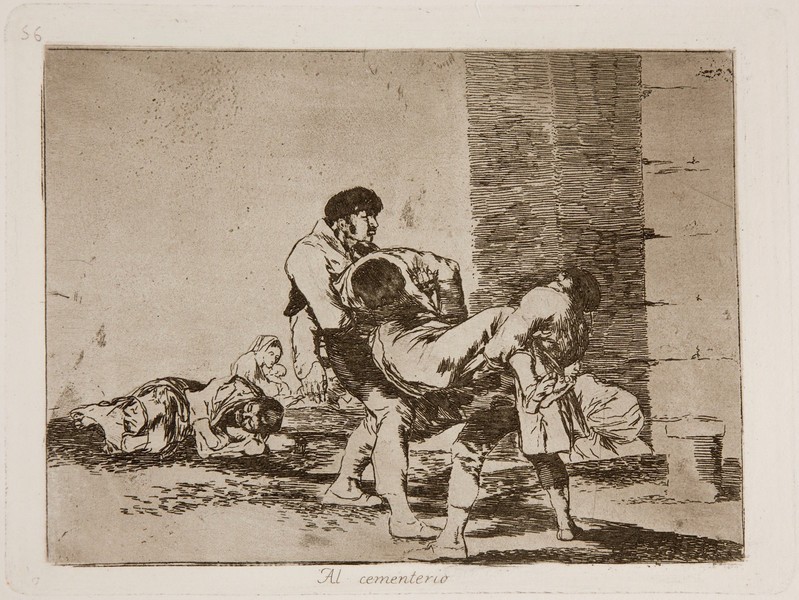 30 (on the lower left-hand corner of the plate).

The second artist's proof shows horizontal lines that shade in an area between the elbow and thigh of the figure located on the far right of the print.

Two men are carrying a body. One of the men, shown side-on, is carrying the legs of the body, while the other placed further into the background grasps the corpse by the waist, causing the head of the corpse to slump forward, obscuring the face. In the background there is another lifeless body waiting to be taken to the cemetery. A short distance behind this figure, a woman holds a child in her arms.

The image depicts the transport of dead bodies to the cemetery, one of the greatest problems following the massive increase in deaths caused by the famine of 1811 to 1812. For public health reasons, it was prohibited to take corpses to churches or chapels, and it was decided that all bodies should be deposited in public cemeteries on the outskirts of the city.

Juan Carrete suggests that this image of two men carrying a body could be read as a secular interpretation of the burial of Christ. He even proposes a possible source of inspiration for the print: The Entombment of Christ by Caravaggio (Milan, 1571 - Port Ercole, 1610) which Goya might have seen either during his trip to Italy between 1769 and 1771 or by means of a print reproducing the work.

The plate is stored in the National Chalcography (cat. 307).