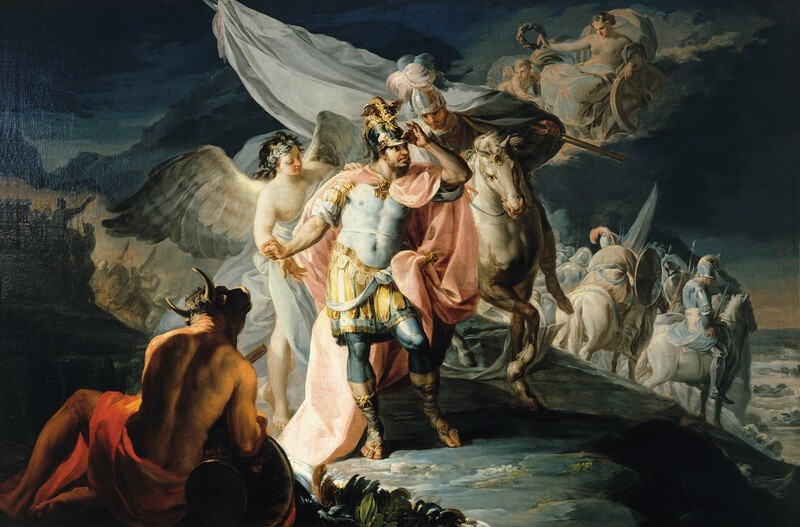 This painting was entered into the competition held by the Academy of Fine Arts of Parma in April 1771. The academy, founded by Philip of Bourbon in 1752, held painting and architectural drawing competitions open to all comers. In 1770, the painting competition for the next year was announced. The chosen theme, "Hannibal the Conqueror views Italy for the first time from the Alps" was inspired by the poetry of Abbot Frugoni, the first secretary of the Academy until his death in 1768. The Alps were also enjoying a new appreciation through the arts, and so the subject was very much in fashion.

It is likely that Goya found out about the competition from the Sicilian painter Gesualdo di Giacomo, another participant in the competition whom Goya met in Rome. Other competitors also included Pierre du Hallas and Paolo Borroni. The painters must have sent their entries to the academy in April 1771, together with a letter addressed to the new secretary, Carlo Castone della Torre Rezzonico, in which they specified their nationality and the master with whom they had trained. They were competing for the prize of a medal weighing five ounces of gold.

Paolo Borroni, who had studied at the academy and had won the previous year in the category of compositional drawing which was only open to students of the academy, won the first prize once again in the painting competition of 1771.

The whereabouts of this work were unknown for many years, until at the end of the 19th century it was acquired by the businessman, archaeologist and historian Fortunato Selgas, who had no idea that Goya was its author.

In 1994 the painting was officially presented as an authentic Goya by the Prado Museum.

In 2020 the Amigos del Museo del Prado Foundation bought the work from the Selgas Fagalde Foundation, which it later donated to the Museo Nacional del Prado.

The letter dated Rome, 20 April 1771 and sent by Goya along with his painting was written in good Italian, albeit with the occasional Hispanicized word. It is thought that it may have been written by one of the Spanish students that Goya met in Rome, although it is written in first person and signed by the artist. The signature, Goja is an Italianized version of his surname.

The painting carries the motto specified by the competition rules and extracted from the sixth book of Virgil's Aeneid: Jam tandem Italiae fugientis prendiomus oras, meaning "And finally we reach the elusive coasts of Italy".

The following three criteria were used by the professors of the academy in the awarding of prizes: faithfulness to the contents of the literary text, correct rendering of anatomy, and the "decent" arrangement of the figures in the composition. The competition rules specified that the historical painting should show Hannibal touching the visor of his helmet, accompanied by a winged angel who holds his hand, while, with a joyful expression, he views the beautiful fields of Italy soon to be conquered, his upcoming victories in mind. All this was based on the content of a sonnet by Frugoni, the real figure being paid tribute to during this edition of the competition.

Goya's version displays baroque leanings. Hannibal occupies the centre of the composition, embodying all the tension of the work, his body structured according to classical models. The accompanying angel has been associated with Gianquinto's models. In the foreground, we can see the figure of a man with a bull's head; his back to the viewer, he carries a pitcher from which water spills forth. This is the personification of the River Po in Lombardy, in keeping with the iconography of Cesare Ripa. Goya gives a great deal of importance to this figure, placing him in the foreground, silhouetted against the light. In the sky in the upper right-hand section of the painting, we can see a female figure on a chariot descending to meet Hannibal with a crown in her hand. This figure is, presumably, an allegorical Victory (or Fortune, according to Jesús Urrea), a figure which does not appear in any of the surviving sketches of this work, suggesting that Goya decided to include the figure at the last moment. In fact, it is possible that he had seen the winning work from the competition of the Roman Academy of San Luca, Achille avvisato da Iride di tornare a combatiere by Pietro Pasquale Ciaramponi, whose composition has much in common with Goya‘s Hannibal. It is very likely that Goya had the assistance of someone who could translate Frugoni's sonnet, allowing the artist to interpret it correctly. One of the verses says "vittrice militar fortuna", which corresponds perfectly to the female allegory.

As we can see, Goya made a great effort to execute the work according to the academy's specifications. At this time he was a young artist trying to build a reputation. The plethora of surviving materials related to the contest and their links to Goya's painting confirm the artist's ability to adapt to academic demands. Various authors have also pointed out that the choice of theme might have had a strong influence on Goya's entering the competition, since he may have felt some affinity with Hannibal, a traveller who arrived in Italy ready to conquer the country, just as Goya wished to win over the Italians with his painting.

It is also possible that the fact that Borroni was a student at the academy favoured the artist when it came to producing the work, since he had been learning from the same men who would judge the entries. Borroni's work was influenced by neoclassical models, which gave importance to the landscape, giving it a sublime aspect and, above all, emphasizing the soldiers in the foreground, whose perfectly executed anatomy embodied all the tension of the scene, with Hannibal placed in the background.

Although Goya did not win the first prize, the academics did award him a special mention. The panel afforded him a total of eight votes, commenting that they appreciated his skilful brushwork, the warm expressiveness of the face, and Hannibal's grand pose. They added that if the colours used had been closer to reality, and the composition a little closer to the poem's narrative, it would have been more difficult to decide on a winner.