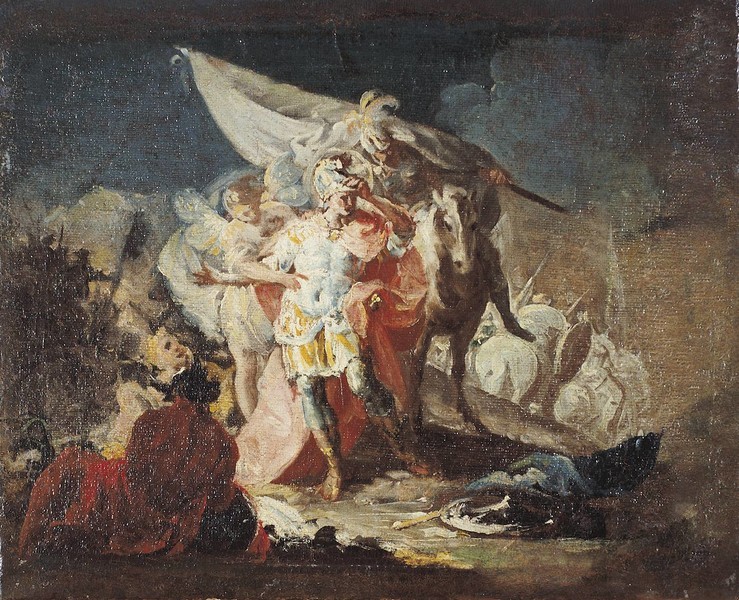 This work is a sketch for the painting entered by Goya into the competition of the Academy of Fine Arts of Parma announced in 1770. It was published by José Manuel Arnaiz and Rogelio Buendía in 1984. At the time it was received with some reservations, given its poor state of conservation following the restoration work it underwent prior to publication. The drawings and notes in the Italian Sketchbook confirm its authenticity, since Goya dedicated no less than four pages of his notebook to preparatory studies for this sketch. Arnaiz and Buendía published a detail showing Goya's signature on the sketch.

The subject of the work is Hannibal, the Carthaginian general, crossing the Alps and taking in his first view of Italy. There are some differences between this sketch and the definitive work. It seems that Goya had decided to place Hannibal in the centre of the composition early on, since this does not change either in this sketch or in the other surviving study, or indeed in the notes of the Italian Sketchbook, although in the latter we can observe a change of orientation in the composition, which is vertical. The dimensions of canvasses to be entered into the competition were specified by the academy, which is surely what led Goya to change the orientation.

The pose of the Carthaginian general is the same, in line with the competition rules. His position appears to have been inspired by the Apollo Belvedere, although here he displays a more pronounced contrapposto. Behind Hannibal, there is a soldier on horseback carrying a standard and a shield which is placed behind the general's head as if it were a halo, a feature which would not appear in the final painting. In the background, the rest of the soldiers descend towards the valley. In the foreground, we can see the allegorical figure representing the River Po, and opposite her, a new figure with blond hair. Given the sparse details of the sketch, it is not quite clear who this figure is. Arnaiz and Buendía believe that the figure is a boy, while Wilson interprets it as being a vanquished barbarian who gazes up at the hero Hannibal. Manuel Mena identifies it as an allegorical representation of the Alps, taking the second, more detailed sketch into account.

The colour scheme of this study is much more vivid than that used in the final work, which acquired a more unreal, atmospheric feel due to the coolness of the tones employed.

The 1993 restoration revealed the virtuoso technique used by Goya for this work, although the impasto brushwork lost its physical relief forever.

For more information on the Parma competition, see Hannibal the Conqueror, Viewing Italy for the First Time from the Alps.

The painting was lined some time before 1984, leaving the painted surface flattened and making the thick line of the canvas more visible. It was also overpainted.

In 1993 the painting underwent further restoration work. It was attached to a new frame and it was enlarged at the edges, adding 1 cm strips on the upper part of the canvas, 2 cm on the right-hand side, and 1.5 cm at the bottom of the canvas, which are now hidden by the current frame, restoring the visual effect of the original format.