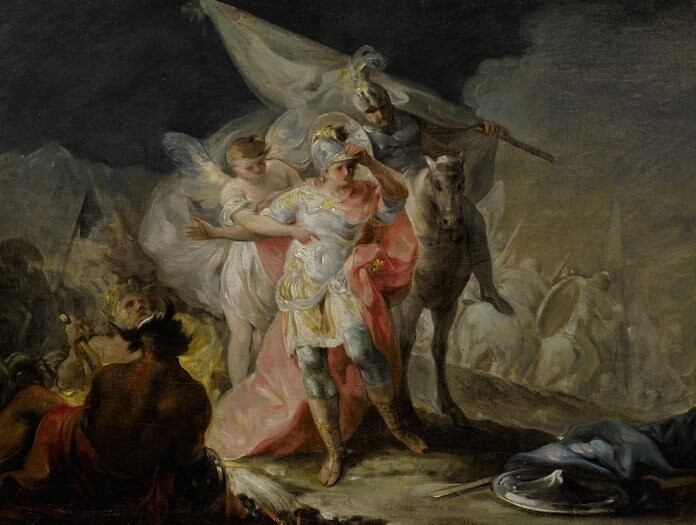 This work is a sketch for the painting entered by Goya into the competition of the Academy of Fine Arts of Parma in 1770.

On 28 January 2000 it was auctioned at Sotheby's New York, and is now housed in a private collection.

This seems to be an intermediate study produced after the first sketch and before the definitive work. It is more developed than the first, and some of the details of its composition more closely resemble the final canvas. For example, the frame of the composition is tighter in this sketch. Likewise, the standard carried by the horseman is cut off, as in the final version. The tones have also been softened and are cooler, moving away from the vivid colours used in the first sketch.

The flag, shield, and arms, trophies plundered from the enemy and strewn on the floor in the first sketch, are also present in this version, capturing the attention of the horseman. Equally, the ambiguous blond figure which appears behind the River Po, also features in this second sketch, but is eliminated from the final painting in the name of simplification. According to Manuela Mena, this figure may be an allegory of the Alps, personified as a strong, bearded man, wearing a crown and carrying a rod representing his power. His barbarian aspect is a reference to the peoples who inhabited the Alps, who had been defeated by the hero Hannibal.

For more information on the Parma competition, see Hannibal the Conqueror, Viewing Italy for the First Time from the Alps.