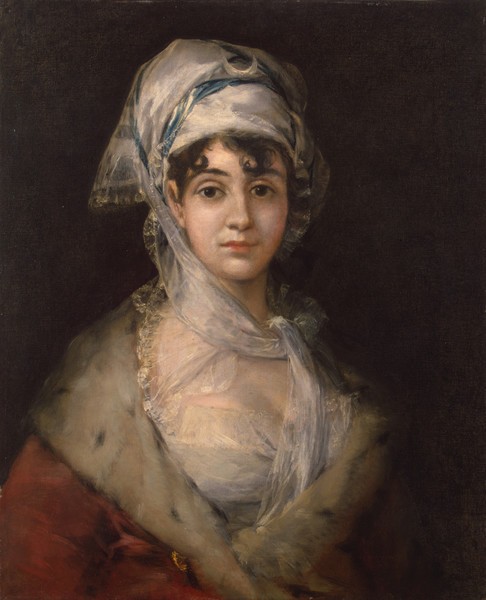 According to Calvo Serraller, this work may have been commissioned by Antonio Gil de Zárate, the subject's son, upon his mother's death in 1811, with Goya using the other portrait that he had supposedly painted of her several years before as his model (Antonia Zárate).

This painting was in the Paris collection of Gimpel et Wildenstein before entering that of Mr. Howard B. George, New York. Armand Hammer donated it to the Russian museum in 1972.

Doña Antonia Zárate was born in Barcelona in 1775.

She was a famous theatre actress who used to perform in Madrid. Her husband, Bernardo Gil, was a singer, as well as a comic actor.

This half-length portrait shows the subject before a dark background, dressed in an overcoat fastened with a single golden button, leaving much of the woman's generous bust visible. Her head is covered by a white headscarf, with a semi-sheer sash which has been tied loosely around her neck.

Her face, with its striking large eyes, is looking out at the viewer with a certain melancholy air. As in the portrait of 1805-06, some of her dark hair has fallen down over her forehead in two large curls.

The transparency of the fabrics of the dress that she is wearing under the overcoat have been executed with great delicacy and mastery.

According to Gudiol, the flat background shows neither faults nor any light or spatial effects, its dark hue serving as a contrasting factor to give intensity to the shape of the figure and to suggest real space