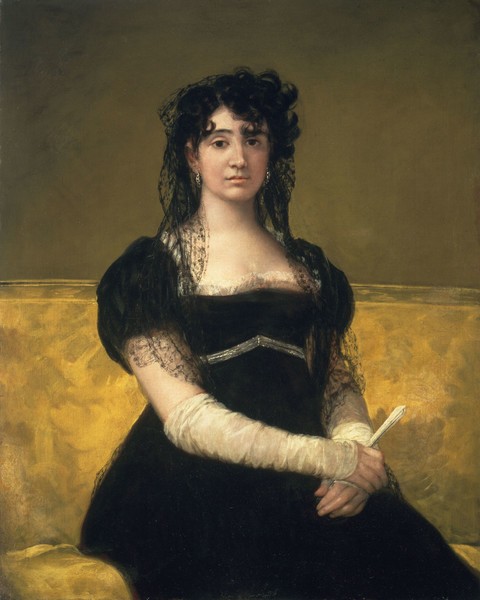 This painting came from the collections of Don Antonio Gil and Doña Adelaida Gil of Madrid, and later belonged to the collection of M. Knoedler and Sir Otto Beit, of London.

Doña Antonia Zárate was born in Barcelona in 1775. She was a famous theatre actress who used to perform in Madrid. Her husband, Bernardo Gil, was a singer, as well as a comic actor.

The subject is shown here seated on a large Louis XVI style sofa, upholstered in a yellow cloth that lends the painting a feeling of luminosity.

She is dressed in the fashion of the first decade of the 19th century, in a black, empire-line dress. Concealing the low-cut neckline is a piece of delicately painted lace edging, the painting of which shows the same mastery of technique as the fine mantilla that falls down over her shoulders and which leaves some of her curly hair visible. Her arms are covered by a pair of long white mittens.

This elegant woman looks straight out at the viewer, and her face has a lost, almost melancholy look about it.

According to Francisco Calvo, the dress and the figure's placement in front of a neutral background ties it to other portraits by Goya, such as Young Lady Wearing a Mantilla and Basquiña and Young Woman with Fan. Goya painted this same woman on two separate occasions. The other portrait (Antonia Zárate) of her is now in the Hermitage Museum in Saint Petersburg. The two portraits were displayed together for the first time in an exhibition in Madrid, in 2002.