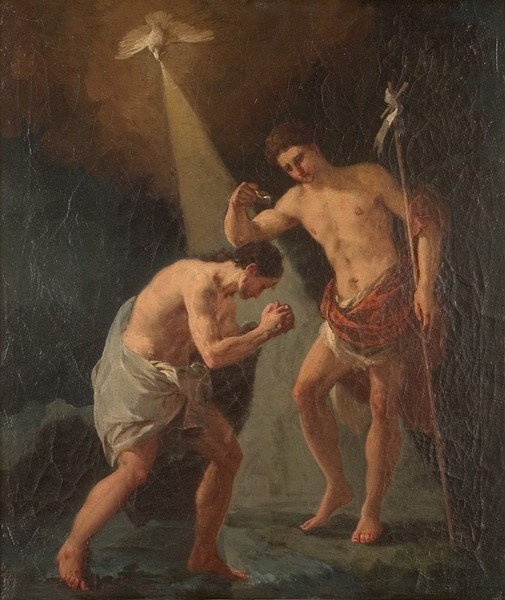 The most common theory is that this piece was intended as a devotional painting for the banker Juan Martín de Goicoechea y Galarza. It was inherited by María Pilar Alcíbar-Jáuregui y Lasauca, the second wife of one of the Counts of Sobradiel, appearing in a family inventory from 1867.

The painting depicts Saint John the Baptist, the supposed recipient's namesake. The image is imbued with a mysticism which moves away from the rococo feel of earlier works to fully embrace the Italianate style which Goya picked up on his travels, evident in the sculptural treatment which gives the two figures an accentuated three-dimensional quality. The two men in the image are clothed in fastened robes. They have been placed on a black background lit up only by the ray of light emanating from the Holy Spirit. At their feet we can make out the blue of the River Jordan.

X-rays have revealed that Christ had been painted kneeling on the floor, his hands positioned lower down than in the final version. A hand had been painted in the upper part of the work, and there was an upside-down head after Giaquinto in the lower left-hand corner.

The painting has evoked differing opinions in terms of dates. Gudiol, Gassier, Wilson and Salas date the work as having been created around 1775-1780, no doubt because of the Italianate echoes in its style. In contrast, Arnaiz is of the opinion that the work can not have been painted any later than 1771-1775, between the artist's return from Italy and his move to Madrid.

The painting was carried out on a surface prepared with a low concentration of glue, which caused extensive spider web craquelure very characteristic of some works by Goya from this period.

This meant that the pigment could easily flake away from the canvas along the edges of the paint islands formed by the cracking. Therefore, the painting was subject to reinforcement and restoration work in the 1980s.