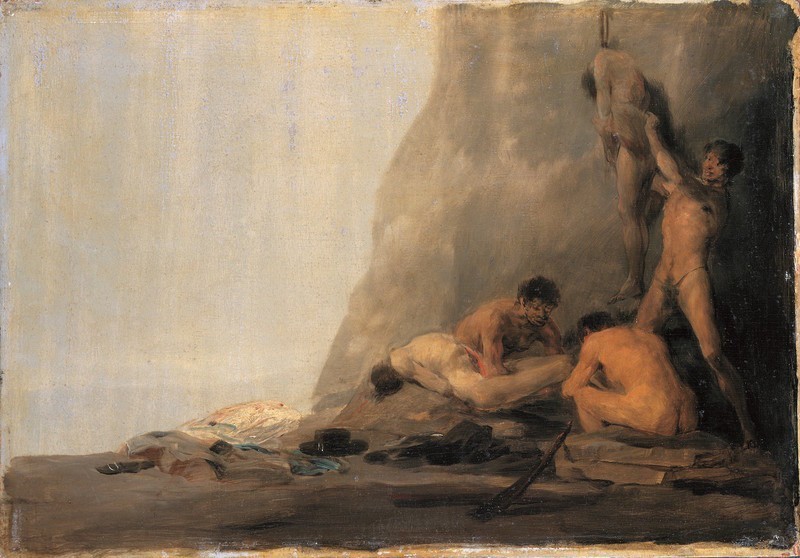 This work and its companion piece, Cannibals Contemplating Human Remains, belonged to the painter Jean François Gigoux (Besançon, 1806-Besançon, 1894), who bequeathed them to the Musée des Beaux-Arts et d'Archéologie in his home town.

In this painting we see a group of three cannibals as they prepare the bodies of their victims in order to eat them. One of the cannibals has his hand in the guts of one cadaver whilst another is skinning the body of a man hanging above the group. Both bodies have been stripped of their clothes, which we can see scattered across the ground.

The way in which the scene depicts human anatomy is particularly striking. The bodies which are about to be devoured are naked, deprived of all dignity, yet so are those of the cannibals, in this case in allusion to their primitive state.

It is fairly likely that Goya would have known the story of the Jesuit missionaries Jean de Brebeuf and Gabriel Lallemant, murdered by Iroquoi tribespeople in Canada in 1649 and then eaten by cannibals. This story could have been what inspired this work by Goya, in which the artist has resorted to his own imagination in order to recreate this scene of cannibalism. Goya thus continued with the reflections which he initiated in the works painted in Cádiz in around 1793, in which he started to explore some of the deeper and at times more shameful corners of the human mind.

In these paintings about cannibalism, the Aragonese artist looks at the most irrational part of man, and in so doing gives a foretaste of Théodore Géricault's (Rouen, 1791-Paris, 1824) famous take on this same subject, The Raft of the Medusa (1818, Musée du Louvre, Paris).