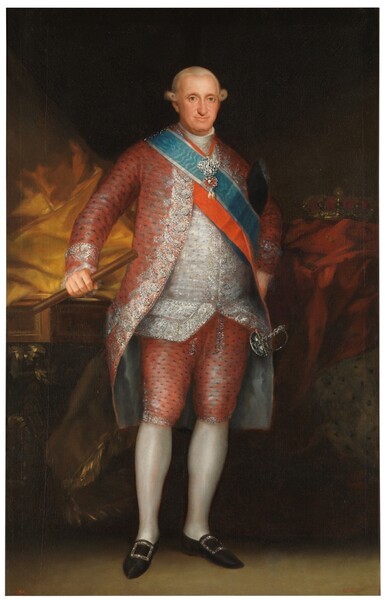 After it was painted, between March and June of 1789, this portrait and its companion piece, Queen María Luisa with Headdress, were in the palace of Aranjuez. Both works later went to the palace of Buen Retiro, and from there to the Prado Museum, in 1847. By a Royal Order of 1883, they were sent to the Ministry of War, going to the Museum of Modern Art in 1911. In 1933 this work was deposited in the Royal Academy of Fine Arts of San Luis and was on display in the Museum of Zaragoza until 1972, when it finally returned to the Prado Museum.

This painting, like its companion piece, was painted to commemorate the coronation of the king and queen in January of 1789. In these two works, Goya used a new, full-length composition, which shares certain characteristics with the half-length one, of which several replicas exist, and which was conceived and executed around the same time.

The king is portrayed here standing, looking straight out at the viewer, dressed in a salmon-coloured dress coat adorned with silver detailing and a white and silver jacket. Around his waist he wears a ceremonial sword and on his chest are the necklace of the Order of the Golden Fleece, the sash of San Genaro and the original sash of the Order of Charles III. In his right hand he is firmly grasping his baton. On the right-hand side, in the background, we can see the royal symbols: the crown and the purple ermine-lined robe. Completing the decoration is a striking, and rather ostentatious, orangish-coloured curtain, which is draped over a desk on the left-hand side.