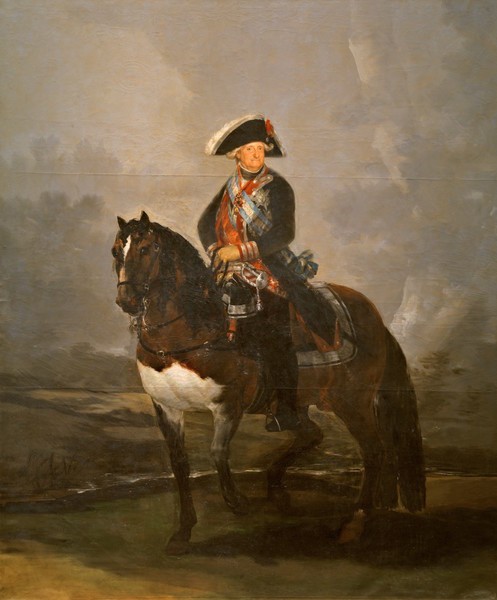 This painting was recorded as being located in the Royal Palace in Madrid in 1814. It entered the Prado Museum's collections in 1819.

The work is part of a pair: its companion painting is the portrait of María Luisa of Parma.

King Charles IV (1748-1819) is shown wearing the navy blue Colonel's uniform worn by the Royal Guards, adorned with the sash of the Order of Charles III, the Order of Saint Januarius and the Order of the Golden Fleece.

The two pieces show the influence of the equestrian paintings produced by Velázquez for the Salón de Reinos ("Hall of the Kingdoms") in the Buen Retiro Palace, in particular his portrait of Margaret of Austria, which Goya had made an etching of in 1778.

According to Goya himself, this subject was "one of the most difficult that a painter could be offered", demonstrating the problems that he faced in executing this work - as we can appreciate from the clear lack of anatomical accuracy in the proportions of the horse.