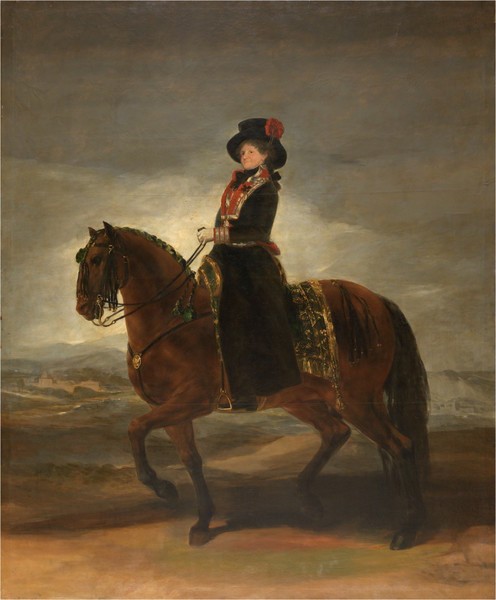 This painting was recorded as being located in the Royal Palace in Madrid in 1814. It entered the Prado Museum's collections in 1819.

The painting is one of a pair; its companion painting is the equestrian portrait of Charles IV.

The queen is portrayed sitting on her horse, Marcial, which was a present from Manuel Godoy. She is dressed in the dark uniform of a Colonel of the Royal Guard. She holds the horse's reins with great ease and elegance. In the background on the left we can see a landscape which features the Monastery of El Escorial and the outline of the Madrid sierra.

The two pieces show the influence of the equestrian paintings produced by Velázquez for the Salón de Reinos ("Hall of the Kingdoms") in the Buen Retiro Palace, in particular his portrait of Isabel of Bourbon, which Goya had made an etching of in 1778.

The details of the Queen's outfit and the horse's ornate saddle cloth are merely sketched in this work, in contrast with the painstaking technique used in earlier portraits.

The process of painting this portrait is well documented thanks to the correspondence sent between the Queen and Godoy during September and October of 1799.