Treat them, then on to other matters (Curalos, y á otra) 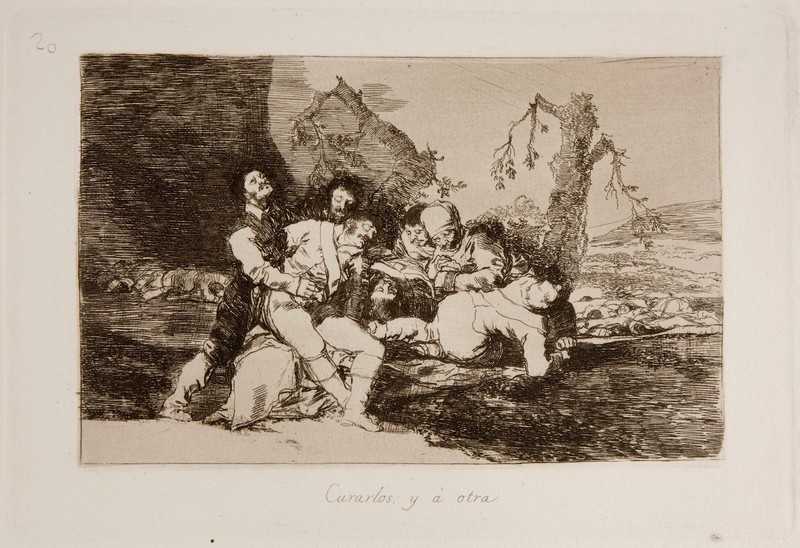 In the second state proof of the second etching, the original design was extensively retouched, with the area that had previously been left unworked in the foreground on the right-hand side filled in. There are some burnished foul bites visible on the figures.

We can see how a correction was made to the title, adding the letter ‘y' where an ‘i' had probably been engraved initially.

This is one of the few etchings in the series, along with All this and more and Charity, to be dated by the artist.

There are two preparatory drawings for this work in the Prado Museum.

Treat them, then on to other matters depicts the treatment received by those wounded in the war. In the background we can see two men holding up a wounded soldier from behind. Slightly further back another, slumping figure is receiving aid.

The scene takes place outdoors, in daylight and, just as occurs in other etchings in the Disasters of War series, the natural environment is an inhospitable one. The trees appear barren, their branches hanging down, almost without life. Such surroundings make the ideal setting in which to stage these scenes of death and destruction.

The artist has used the etching process repeatedly, especially on the left-hand side of the print, which is visually heavier than the right-hand side. The left of the image features a dark, solid rock, which contrasts sharply with the clear sky shown on the right.

The scene is a depiction of false piety, in which the aid is not given disinterestedly, and the purpose of it is to get the injured men patched up as quickly as possible so that they can prove useful again to the war effort. Nobody appears at all interested in the corpses that we can see in the etching's background, starkly lit by Goya.

This same subject matter is addressed in other etchings in the series, including no. 24, They'll still be useful and no. 25, So will these.