Flagellants next to an Arch (Disciplinantes junto a un arco) 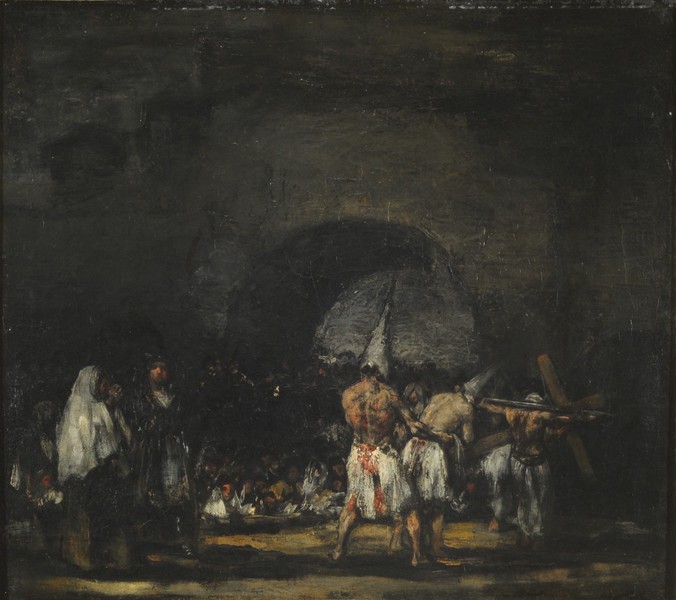 This work belonged to Luis de Madrazo, and was authenticated as an original Goya by Mariano Goya. It was later acquired by the institution where it is housed today.

The work seems to be another version of the work A Procession of Flagellants preserved in the San Fernando Academy. Here we are also presented with a group of flagellants, in this case walking next to the arch of a bridge, a common feature in various related works by Goya (see Masked Dance under an Arch). The two penitents wear the same dress as in the work belonging to the Academy, but this time they walk without pageantry or images, watched by the fervent onlookers. The modelling of the hardened bodies is magnificent, and the abundant rivulets of blood which run down their back gives the scene a solemn sense of drama. As well as the two flagellants there is a impaled figure and another who carries a heavy cross on his shoulders. The people gathered to watch the spectacle are grouped under the bridge. On the left, a veiled woman holds her hands to her face in a gesture of horror, while another woman by her side looks at the viewer, transmitting her rejection of the macabre religious spectacle, reminiscent of the horrified man in A Procession of Flagellants.

There is a copy of this work in the Lázaro Galdiano Museum in Madrid (inv. 2016), formerly attributed to Goya.