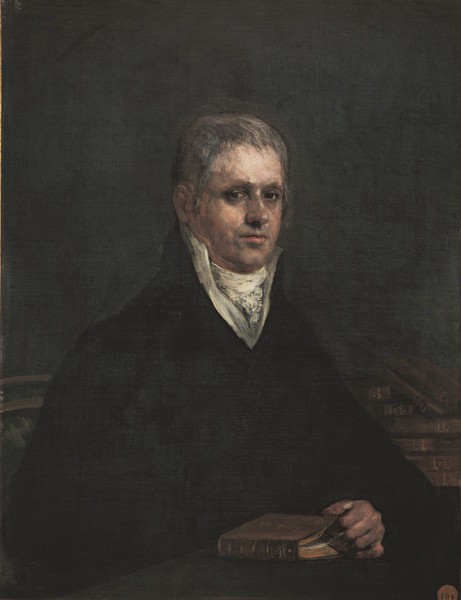 Goya was almost certainly commissioned to paint this portrait to commemorate Munárriz being named director of the Royal Company of the Philippines.

The work belonged to the sitter, who bequeathed it in his will to the Royal Academy of Fine Arts of San Fernando, of which he was an honorary member.

Don José Luis Munárriz (Estella, Navarre, ?-Madrid, 1930) studied in Salamanca and later moved to Madrid, where in 1796 he was appointed honorary member of the Academy of San Fernando and Secretary of the Royal Company of the Philippines. Together with Ignacio Omulryan, it was probably he who proposed that Goya make a painting of the meeting of this company that took place on 30 March 1815, in which he was to be named director.

This half-length portrait shows Munárriz sitting and turned in half profile. In front of him, on the table, is a book in which he has inserted one of his fingers as an improvised bookmark, as if the viewer had just caught him reading. The book is a copy of the Lectures on Rhetoric and Belles Lettres, by Hugh Blair, which had been translated into Spanish by Munárriz and republished in Spain that very same year, 1815. Behind the sitter is a pile of books, on the spines of which we can read the names of important poets, those whom Blair makes reference to in his work on aesthetics: Horace, Virgil, Quintilian, Camões, Petrarch, Boileau, Cervantes and Addison.

The sitter is shown wearing a black jacket, without any discernible details and which gives him a triangular, almost flat and abstract shape, topped off by the white collar of his shirt and its frills, which are painted in a thick impasto. His facial features are realistically captured, and his expression reflects a certain distrust towards the intruding viewer. Just as with the portrait of Omulryan, the figure is excessively tall and slender, something which Goya must have noticed, as the visible changes around Munárriz's head demonstrate. The dark colour palette employed here anticipates the technique that Goya would use in his bourgeois portraits, especially those made in Bordeaux.