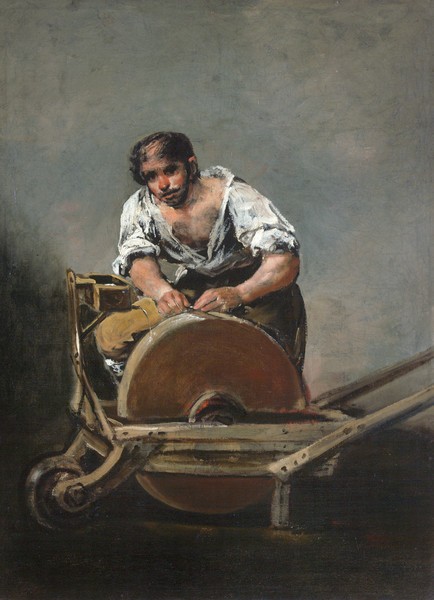 The knife grinder is shown in the middle of his task. He is bending over, leaning towards the wheel to place the knife on it, while his right foot rests on the barrow. The movement of the wheel and the heat it gives off as it spins round quickly is expressed in the red brushstrokes close to the axel. A thin trickle of water pours onto the wheel to counteract this heat. The pose of the figure is reminiscent of the Belvedere Torso, which Goya drew in the pages of the Italian Notebook. The grinder is aware of the viewer, and his head is raised, looking directly at us, as if we had interrupted him at his work when he is too busy to stop. His face reveals the exhausting nature of his job. He is wearing a white shirt with the sleeves rolled up to the elbows, some undone buttons revealing his bare chest. The setting for this scene is not defined, with a neutral, flat background offering no depth whatsoever.

This work and its companion painting, The Water Carrier, have been interpreted as paying tribute to the anonymous heroes of the war against Napoleon. In this case, the knife grinder would be in charge of sharpening the combatants' knives, sometimes the only weapons they had available to them. Goya knew how to reflect the inequality of the two sides, and in his war imagery there are numerous representations of Spanish fighters defending themselves with stones, pieces of wood, and, above all, knives.