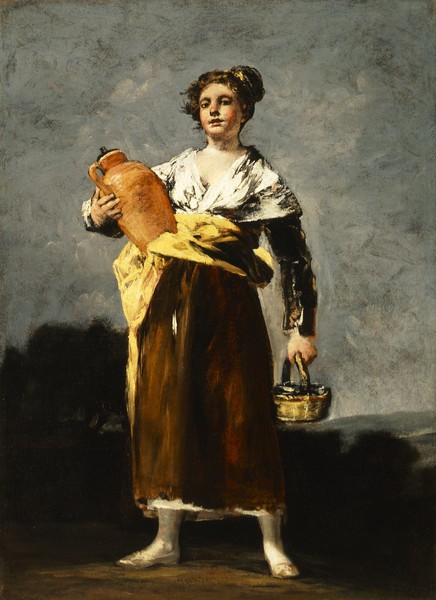 "A water carrier and its companion painting number thirteen valued at ... 300 [reales]", reads the entry in the 1812 inventory drawn up on the death of Josefa Bayeu. The entry refers to this painting and its pair, which has always been considered to be The Knife Grinder. Gassier and Wilson have expressed their surprise that the painting should be assigned such a high value in the 1812 inventory, given the relatively small size of this pair of paintings. The same valuation is given to Old Women or Time, a larger canvas, meaning that these are the next most expensive paintings in the inventory after the large canvasses Maja and Celestina and Majas on a Balcony. This has led them to the conclusion that perhaps the works housed in the Budapest museum are reductions rather than the original works, although there is no other evidence which backs up this theory. It is more likely that Goya himself put a great value on these paintings which he had almost certainly painted for himself, as can be deduced from their appearance in the inventory, as well as the fact that they were painted over canvasses which had already been used, as x-rays have revealed.

Juliet Wilson is of the opinion that the low point of view used in both works suggests that they were created as overdoors for Goya's Madrid residence in calle Valverde.

Prince Alois Wenzel von Kaunitz-Rietberg, ambassador in Spain and art enthusiast, acquired these two works for his private collection. He later sold them to Prince Nicolas Esterházy, who in turn sold them to the Museum of Fine Arts in Budapest.

The Water Carrier and its companion painting are outstanding examples of genre painting by Goya. They are remarkable works in terms of their modern look and originality: this kind of scene was not usually represented as it is here, against an almost abstract background.

The girl in the image is shown full length, from a low perspective. The pose of the water carrier, dignified, holding a pitcher on her right hip and a basket in her left hand, has classical connotations: the worker is transformed into a heroine, and her figure is exalted against a landscape entirely subordinate to her. This treatment fits in with the interpretation afforded to these two works by critics, who interpret them as a homage to the anonymous heroes of the war against Napoleon. These are not the only works in which Goya remembered his fellow countrymen who fought such a worthy fight at the Sieges of Zaragoza: he also expressed similar sentiments in The Manufacture of Gunpowder and The Manufacture of Bullets. In this case, the painter might have wished to pay tribute to the girls who carried water to the soldiers and offered them encouragement.

This painting is also noteworthy for its colour scheme. The water carrier is wearing a reddish-brown skirt, a white shawl wrapped across her chest, and a large yellow cloth tied around her waist like a sash to support the weight of the pitcher. The colours contrast with each other, and this attractive colour scheme is completed by the orange of the pitcher and greyish-blue of the background.

There is a drawing in Album C, nº 78 which is usually linked to this water carrier. The figure which appears in that piece is similar, although she does not have as heroic an aspect; rather, she is artless and seductive, and might better be associated with the girls in the tapestry cartoon The Water Carriers.

Moreover, there are various existing copies of this work, suggesting that it was much admired, although the authenticity of these works has not been proven. One of these hangs in the Norton Simon Foundation in Fullerton, California. Another is housed in the National Museum of San Carlos in Mexico, which is considered to be a copy by that institution. Finally, there is another in the collection of the Marquis of Montesa in Madrid.