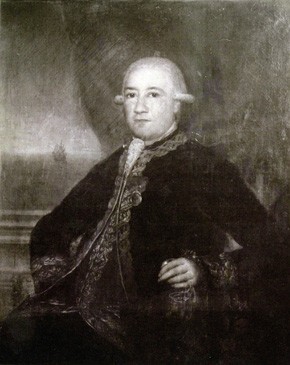 José de Mazarredo y Gortázar appeared in this half-length painting sitting at a table laden with books (in allusion to his military writings) and on top of which his left arm rested, in the hand of which he holds a watch. The Cross of the Order of Santiago and the rank of lieutenant general, which he achieved in 1789, were both included, meaning that the painting must have been made at some point after that date. The background consisted of a curtain drawn back to reveal a seascape with a boat visible on the horizon.

There exists a replica of this portrait (Lowe Museum of the University de Miami, USA), of similar dimensions and signed "Goya lo hizo" ("By Goya").