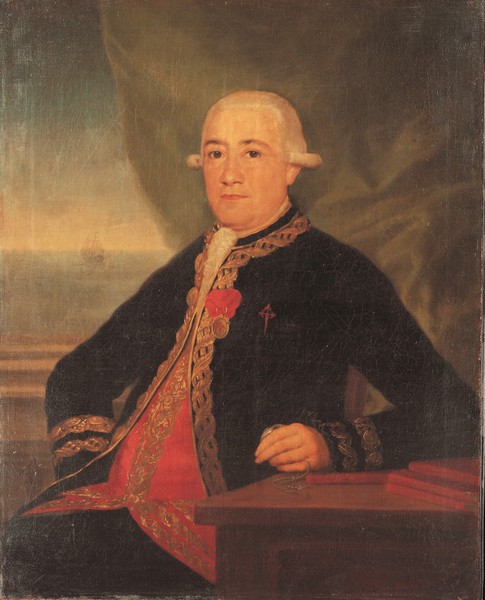 This portrait was given as a gift by the sitter to Manuel Godoy and belonged to the collection of the Duchess of Sueca, the Countess of Chinchón, being housed in the Palace of Boadilla del Monte (Madrid). From there, and on an unknown date, it became the property of Mariano Hernando (Madrid), and then subsequently of Luis de Navas (Madrid), the M. Knoedler & Co. gallery, London, John Levy Galleries (New York) and Oscar B. Cintas (New York and Havana), upon the death of whom in 1957 it became part of the collection of the Cintas Foundation, Miami, which first entrusted it to the Cummer Art Gallery, in Jacksonville (Florida), and then to the Lowe Museum, University of Miami.

José de Mazarredo y Gortázar (Bilbao, 1745-Madrid 1812) joined the Company of Midshipmen in 1759. He served in the Philippines, the Caribbean and the South Atlantic and was in command of various squadrons during the conflicts with England and France. He possessed an outstanding knowledge of astronomical navigation, and naval construction and organization and, according to experts, was the greatest Spanish sailor of the period. He wrote treaties on tactics and navigation and was the author of the Armada's navy decrees of 1793.

In this half-length painting he is shown seated at a table laden with books (in allusion to his military writings) and on top of which he rests his left arm, in the hand of which he holds a watch. The Cross of the Order of Santiago and the rank of lieutenant general of the navy, which he achieved in 1789, are both included, meaning that the painting must have been made at some point after that date. The background consists of a curtain drawn back to reveal a seascape with a ship visible on the horizon.

The sitter's family did possess a replica of the work, but it was lost during the Spanish Civil War (1936-1939), see Admiral José de Mazarredo.