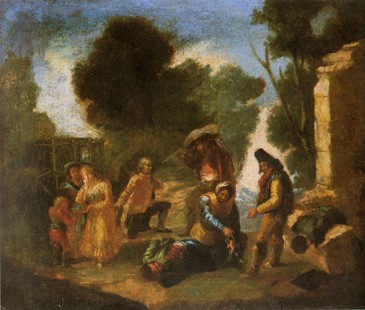 Supposed sketch for a tapestry cartoon that was never realized.

The work came to light through a copy shown in the exhibition Francisco de Goya - IV Centenary of the Capital (Francisco de Goya. IV Centenario de la capitalidad). Later, in 1980, Arnaiz reproduced it in an article in the magazine Reales Sitios in which he asserted Goya's authorship and discussed the second composition discovered under the top painting.

Going by the dimensions and the identical pictorial technique of short, thick brushstrokes, it appears that this work could form a pair with another supposed sketch that never became a finished tapestry, Picnic in the Countryside.

The sketch represents some travellers being hijacked, a common enough occurrence in 18th century Spain but certainly not a very popular choice of subject matter with Charles III. Despite the design's rejection, Goya returned to the topic on two more occasions: Thieves' Raid and Stagecoach Hijacking.