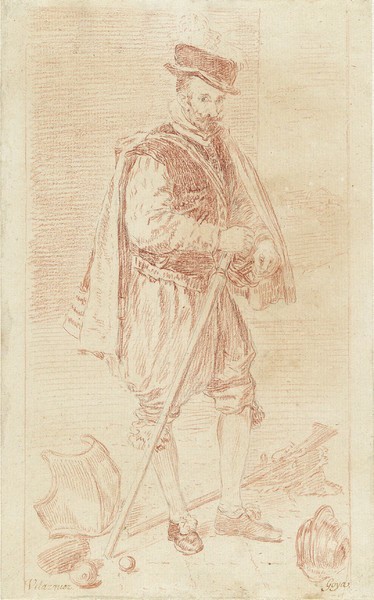 This preparatory drawing made for Goya's copy of Velázquez's painting The Buffoon Don Juan de Austria is noticeably more successful than the subsequent first state proof. This might suggest that Goya was unable to properly transfer the drawing to the metal etching plate (which we do not have) and that the resulting problems only grew worse, just as we can see in the second state proof, in which Goya has retouched the plate using burnished aquatint. The difference between the drawing and the first state proof is that the former is sharper and clearer than the latter, and in this preliminary study Goya has managed to more accurately reflect the metallic sheen of the objects displayed at the buffoon's feet.

In both the drawing and the two state proofs, Goya suggests the window but completely ignores the naval battle which can be seen through it in the original painting.