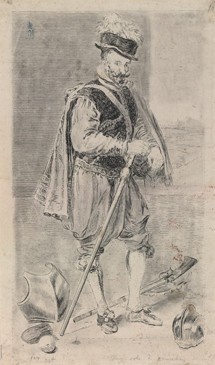 Goya was so dissatisfied with the end result of this work that he decided not to publish it. We do however still have the two state proofs. The first of them comes from the first etching, prior to the second etching and the aquatint. The second proof has been retouched by hand in greenish-grey toned ink on the face, fingers, inside of the cape, underneath the hands and the left knee of the figure of the buffoon, as well as in smudged black pencil. This state proof has been made on the reverse of the second state proof of Barbarossa.

The etching plate for this print was never found, and was possibly destroyed by Goya or reused for another work.

There exists a preparatory drawing for this work at the Hamburger Kunsthalle.

The date when Velázquez painted The Buffoon Known as Don Juan de Austria (Prado Museum, Madrid) has always been open to debate. Some experts propose that it was executed between 1632 and 1633, pointing out the clothing that the sitter is wearing, whilst others believe it could have been made in 1636 or even later, due to the painting's loose brushwork, possibly corresponding with Velázquez's final years.

The name of the buffoon contains a healthy dose of irony and recalls Charles V's natural son: Don John of Austria (Ratisbon, 1545 or 1547-Bouge, 1578). It has also been suggested that the person depicted here by Velázquez could have been the son born of the relationship between Philip IV and his mistress La Calderona, a child named Juan José de Austria.

Don Juan de Austria is shown wearing some slightly shabby velvet breeches and an extravagant plumed hat. The bushy moustache on his face lends the character a comical air, an effect which is heightened by his scrawny legs. Arranged around him are various objects referring to war, a subject which is also alluded to in the naval battle scene which we can see through the window in the background.

The loose brushstrokes used by Velázquez in this canvas make Goya's task, whose efforts to copy the work end in failure, considerably more difficult. In the two state proofs the window makes an appearance although the battle itself does not. The Aragonese artist has carefully reproduced the metal objects at Don Juan's feet, though he is unable to fully capture their lustre. What's more, he has great difficulty depicting both the clothing and the face of the figure. The use of new technical methods in the second proof may represent a failed attempt to overcome the problems that we can see in the first state proof.