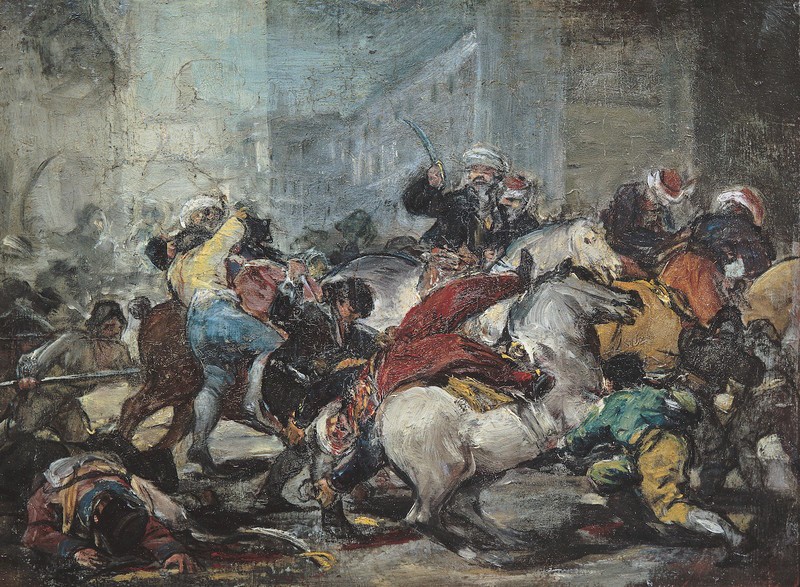 This is a sketch for the painting Second of May 1808. It was first mentioned by Desparmet Fitz-Gerald when it belonged to the Madrid collection of Mr Lázaro Galdiano. There is another surviving sketch for the same work in the Ibercaja Collection in Zaragoza.

Gassier, Wilson and Ansón refer to a note written on the back of a photograph of the sketch preserved in the Witt Library in London, which tells us that Goya gave the sketch to the Spanish diplomat and liberal politician Evaristo Pérez de Castro, whose portrait he also painted.

According to Desparmet, it then belonged to the old Rodríguez collection in Madrid and the Desparmet Fitz-Gerald collection in Paris. It then passed to the Lázaro Galdiano Collection. After that, the work disappeared from records for many years, until it was located in a private collection in Madrid. The study was then inherited by relatives of that owner, who lived in another Spanish city. It was auctioned at the Alcalá Subastas auction room in Madrid in May 2005, and was purchased by a private individual for the 200,000 euro starting price.

The sketch was painted on an irregular panel of mahogany whose dimensions are similar to those of the other sketch. The scarcity of canvas during the war years meant that Goya had to paint various works on panel, as in the case of the other study for the same painting.

Comparing the two sketches we can trace the development of Goya's idea for the final painting. In the first sketch, the artist's interest was focused on the characters in the foreground, and this is also the case of the present piece in which he studies the gestures of the figures and introduces some variations in colours, dress, or the positions of the figures' limbs. Moreover, he has already substituted the Mameluke on the right for the Empress' dragoon. The buildings in the background have become almost abstract planes from which we cannot make out any windows or other details, although the top of the tower set against the sky is quite well defined, and more closely resembles that of the final piece.

The increasingly important role of the horses as we approach the final painting is fundamental: in the first sketch we can make out the face of two horses, while in the second we can see three, and in the final canvas there are four, including the horse of the Empress' dragoon. Just as the cruelty and the irrationality of the men increases, so does the terror of the animals before the savage spectacle which they are caught up in.

Many similarities have been noted between the poses of some of the figures in this study and the Disasters of War series, which was produced before this pair of paintings. This confirms that Goya reused models he had already defined which reflected perfectly the brutality and drama which he once again wishes to represent here.