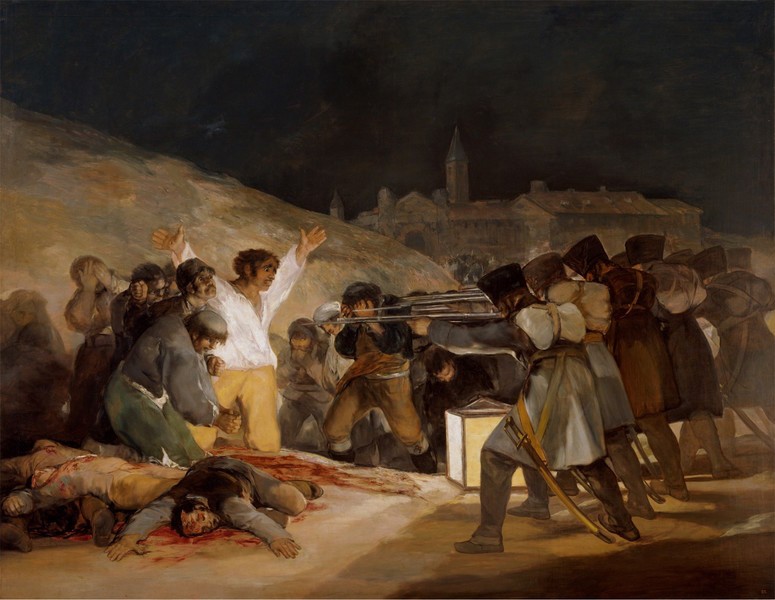 The executions of the insurgents depicted in this work's companion painting took place during the night following the attacks on the French troops. As Murat said to the chaplain Francisco Gállego Dávila, also an insurgent, "he who lives by the sword dies by the sword", and this is how the first episode of the War of Independence played out.

The focus of attention in the composition is the condemned men who await their imminent death. At their feet are the bodies of those who have already been killed, portrayed with startling, realist brutality. On the right we can see the row of infantry of the line soldiers who point their bayonets at the men. They are portrayed as faceless: it does not matter who kills who - it is all irrational violence. The fundamental element of this painting is the different poses which Goya has given to each of the men who confront their destiny. Fear consumes them all, but we can also detect rage in the figure with the clenched fists, anguish in the man in the white shirt with the open arms, desperation for clemency in the figure who crosses his arms, or the regret of the figure who holds his hands up to his mouth in the group of figures approaching behind the rifles.

The background of this scene is the city, outlined against the sky which is in mourning, weighing down on the figures. The light coming from the lantern, which is cast in a cube-shaped pattern (and on many occasions has been referred to as a precursor to the cubism movement), accentuates the cruelty of the scene, highlighting the blood which bathes the floor of this place somewhere in the outskirts of Madrid. It has been suggested that the location might be the so-called mountain of Príncipe Pío, but some documents from the time show that there was no door like that depicted by Goya here. It has also been posited that this might be Puerta de la Vega, where executions also took place. Nevertheless, as in the case of its companion painting, identifying the setting is not important; what matters is the tragedy seen through the eyes of those who will die before the implacable French machine.

Has been recently restored. On the lower left-hand corner there are remains of the damages happened during its moving to Valencia in 1973, because of the Spanish civil war.