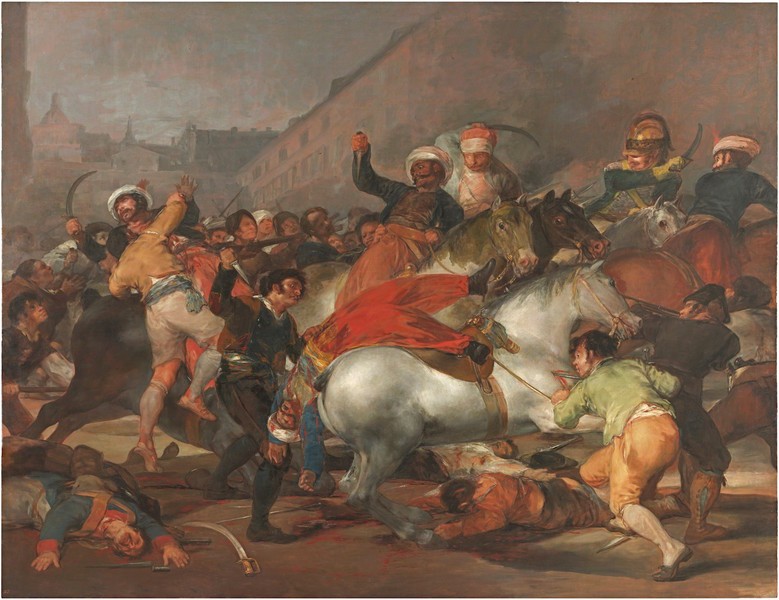 MADRID / DOS DE MAYO ("MADRID / SECOND OF MAY"), on the area of sky of the upper left-hand corner.

Although the commissioning of this work and its companion Third of May 1808 is traditionally linked to the pageantry and celebrations held on Ferdinand VII's return to Madrid on 13 May 1814 following the end of the Spanish War of Independence, recent documents have confirmed that they were undertaken in different circumstances. In fact, months before, in a letter dated 24 February 1814 written by Goya to the Regency Council presided over by the Cardinal-Infante Louis de Bourbon whose portrait the artist had painted when Louis was a child, Goya expressed "his ardent desire to immortalize by means of my brush the most notable and heroic deeds or scenes of our glorious insurrection against the tyrant of Europe". The proposal was well received, and it was agreed that the Central Treasury would pay for any cost incurred in terms of materials, as well as awarding Goya a fee of 1,500 reales per month during the time that he spent completing the commission, "so that such an illustrious and worthy professor should not, at his advanced age, lack the means to survive".

The invoices issued by the carpenter who made the stretchers and the gilder who made the frames have been found, dating from July 1814. Goya's name does not appear on these invoices, but they do allude to the subject of the second of May, and the dimensions cited coincide with those of the catalogued works. They also indicate that the works were destined for the chambers of the King, and on completion both were immediately installed in the Royal Palace. Thus, we can say that this famous pair of paintings was commissioned by the Regency, later taken over by Ferdinand VII.

Goya must have finished his work some time in the autumn of 1814. If he spent some six or seven months on the project and was paid the agreed sum, then he would have received a total fee of between 9,500 and 10,000 reales.

The works were entrusted to the Prado Museum early on, having until then formed part of the royal collections. We know that in 1834 they were already located in the museum's storage, where they remained for more than 40 years until they were exhibited in 1868 when the museum was nationalized.

On 2 May 1808, the people of Madrid, who had been prisoners of the fear and uncertainty generated by the Mutiny of Aranjuez, rose up against the Napoleonic troops that had invaded the city. The insurrections were brutally suppressed. The wave of protests which extended across the whole country led to the War of Independence, which lasted six years and ended with the return of Ferdinand VII and the reinstatement of the absolute monarchy.

The bloody events of May 1808 generated an iconography which focused on four key moments of the insurrection. The first was the citizens' attack on the carriage which had come to take the prince and princess from Madrid on the 2 May; the second, the street fighting between the people of Madrid and the French, above all with the Mamelukes; this was followed by the heroic defence of the Artillery park by Daoíz and Velarde; and finally, the French repression by means of the executions of the early morning of 3 May. Each of the four moments had been represented in various prints - particularly noteworthy are those of López Enguídanos produced in 1813 - as well as in popular vignettes and plays. Goya chose two of the bloodiest moments of the events - the second and forth - to capture both the fury of the people of Madrid and the suppression of the rebels with firearms.

Academics seeking sources used for these paintings have referred to the aforementioned prints and vignettes, which were doubtless known to Goya; however, they have little in common with these works. It is very likely that Goya witnessed some of the street fighting between the population of Madrid and the French, since it took place in various parts of the city. Nevertheless, the search for the presence of Goya at these events has not been backed up by any documentation. Despite this, both the uniforms worn by the Mamelukes, that of the soldier of the Empress' Dragoons who appears on the right-hand side of the composition Second of May 1808, and the campaign uniform with its grey coat of the aggressors in Third of May 1808 are depicted true to life, suggesting that the painter had access to correct information throughout the events.

There is, then, a strong realistic element running through these works alongside the imaginative inspiration Goya uses to narrate the story from a more dramatic perspective, reflecting his primary intention to express the violence carried out on both sides.

The series of prints Disasters of War is essential to an understanding of these two paintings, as the painter was still working on the prints when he started work on the new project. There are many likenesses between some of the characters portrayed, and the works share the witness element implied in the title I Saw It.

The events of the 2 May took place with the first light of day, as depicted here by the pinkish hue of the sky. This kind of bloody confrontation occurred in many locations, and there has been much speculation over the possible site represented here. Some have tried to identify the setting as Madrid's Puerta del Sol, or the architectural elements in the background as the Royal Palace or the Church of San Francisco el Grande. But these are only theories. It seems that Goya was more interested in creating a more generic representation of the incidents which had taken place six years earlier.

The composition focuses on the body of the dead Mameluke, who hangs bleeding from his white horse while a furious Spaniard continues to stab him. The red of the Egyptian soldier's trousers contrasts with the white steed, which is also touched with another spot of colour where a man is stabbing a knife into the animal's neck and blood gushes forth from the wound. This figure is dressed in the same clothing as the executed man who is the focus of the painting dealing with the events of the third of May, thus establishing a strong connection between the two works.

The line of French soldiers stands out against the background. They are trapped by the Spanish, who block their path both on the right and from behind. The bodies of some soldiers and citizens are scattered about, dead on the floor. Goya has portrayed soldiers from the four corps of the French army - Mamelukes, dragoons, infantry of the line, and the grenadiers of the Imperial Guard - who are confronted with some regional countrymen and residents of Madrid. We can identify the man going for the throat of the Mameluke on the back of the fallen horse on the left as being from Valencia from his clothing, footwear, and sash . The only figures in the composition which seem to be conscious - as Goya is - of the irrationality which has taken over the insurgents and the French army are the horses, whose fearful looks are directed straight at the viewer.

Different views have also been voiced as to what exactly is written in the blurry inscription in the sky. The artist disguised the inscription which confirms that this was a painting of the historical events of the May 2 uprisings. Lafuente Ferrari proposed the reading we provide above.

The works were not very well received by the new absolutist authorities. Goya had not painted the heroic deeds of this "glorious insurrection against the tyrant of Europe"; rather, he had represented a savage attack by the Spanish people on the French, and their bloody and terrifying response. The central role given to the people of Madrid had liberal connotations in opposition to the new monarch, which could have been dangerous for him given that Ferdinand had scrapped the achievements of 1812. Most probably for this reason the paintings were not highly valued in monetary terms, and were relegated to the stores of the Prado for many years. These works are a world apart from the great paintings of epic battles in the neoclassical style, reflecting not victory but the disasters of war with a universal reach. Goya once again becomes a global reference through his way of seeing reality and transmitting it to the viewer.