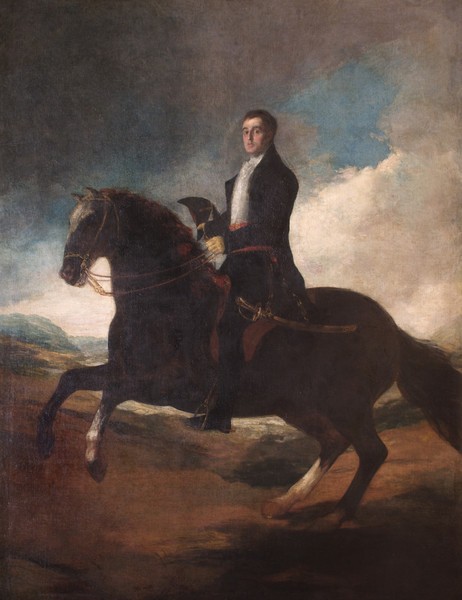 Today, this same painting hangs on a wall in Apsley House, London.

There was a rumour that, whilst Goya was making the portrait or the preparatory studies for it in the presence of his model, the two men had an argument. This appears to have been little more than a romantic tale, however, derived from the fact that, whilst the painter was in the company of Wellington, the duke received a visit from Sir James McGrigor, the head of the Staff Medical Services, whom he violently recriminated for providing certain medical treatment to the wounded during combat.

Lord Arthur Wellesley, Duke of Wellington (1769-1852), was an English general who commanded the British troops fighting in Spain against Napolean's forces during the Spanish War of Independence. On 22 July 1812 he won a decisive battle at Arapiles, prior to the liberation of Madrid.

This life-size portrait depicts the Duke of Wellington mounted on a horse, which is rearing up on its hind legs. He is shown wearing a dark civilian riding outfit, white shirt and red sash. In his right hand he is holding his hat, whilst holding his horse's reins in the other. Sitting very upright on the horse, he looks straight out at the viewer in a pose identical to that in the pencil and sanguine drawing made that same year. This portrait was painted on a canvas on which another equestrian portrait had been painted before. It has been suggested that the identity of the original subject was Manuel Godoy or Joseph Bonaparte. It is very possible that Goya produced this more recent painting by referring to the small bust portrait that he painted earlier, and which is now located in the National Gallery, London, and the drawing of the same subject.