Serie
Cardboards for tapestries: The Madrid fair (painting and sketches, 1778-1780). Bedroom of the Princes of Asturias, El Pardo palace (7b/7) 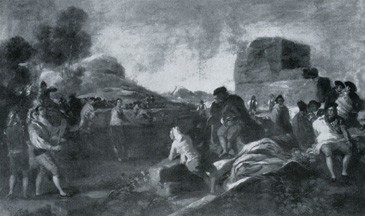 Supposed sketch for the tapestry cartoon A Stickball Game.

Opinions differ regarding the authorship of this work. Some scholars, including Valerian von Loga, Arnaiz, Mayer (who discovered the piece) and Gudiol, consider it to be Goya's own work, whilst others, such as Wilson and Gassier, have expressed doubts. The reasoning of these latter scholars is that the sketch is practically identical to the finished work, whilst the sketches of the Duke and Duchess of Osuna, unanimously recognized as works from Goya's own hand, show multiple changes when compared to the final work. The study that Arnaiz carried out on this work confirms its age, visible in the canvas and the craquelure of the paint, although he himself agrees that it the finished cartoon would perhaps be an excessively faithful reflection of this sketch.

The work shows some colour variation in the lower section, almost certainly due to the existence of an underlying painting that can be clearly seen in the upper section.