Serie
Cardboards for tapestries: The Madrid fair (painting and sketches, 1778-1780). Bedroom of the Princes of Asturias, El Pardo palace (7/7) 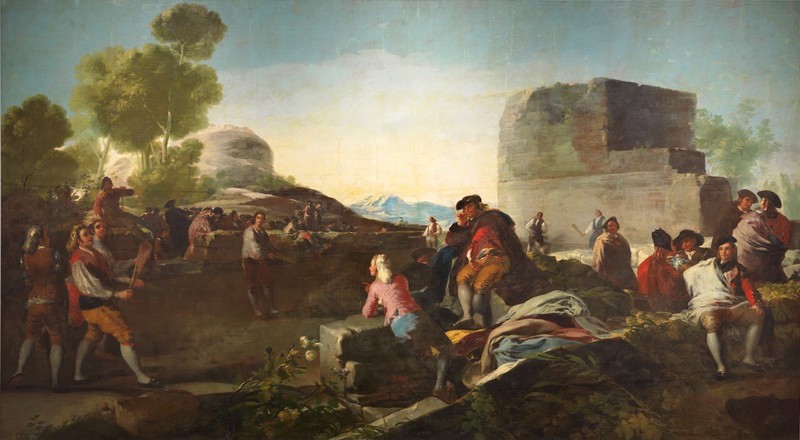 This work forms part of the series of seven cartoons on the theme of the fair for tapestries designed to decorate the bedroom of the Prince and Princess of Asturias in the palace of El Pardo. The other six cartoons were delivered on 6 January 1779 (see The Fair at Madrid), whilst the invoice for this cartoon, which was made later, was presented on 21 July 1779. A Stickball Game took the place of The Blind Guitarist on the north wall of the bedroom. Initially, the later design was going to form part of this series but ended up being used in the antechamber to the bedroom, instead.

The composition of this cartoon is in many ways similar to that of Hunting Party, both featuring multiple figures distributed across different planes, from the foreground going back into the background. There is no doubt that Goya's skill in capturing a sense of depth and his use of chiaroscuros had increased by the time he made this painting. Here the composition is much more believable and the space much better defined.

Gudiol points out that there is a possible self-portrait among the depicted figures.

The subject matter of this work, the game, does not appear to be in keeping with the rest of the series for the royal bedroom, which was dedicated to the peoples of Spain and the landscape of Madrid, under the pretext of the city's annual fair. However, it does maintain the optimism of the rest of the cartoons, a faithful reflection of the mood of Goya, who was enjoying a highpoint in his professional life.

The American scholar Janis Tomlinson goes further and suggests that the ball game is a sexual metaphor, justifying this hypothesis by pointing out the double meaning that the word ball can have, the gesture of the central majo figure, who appears to be drawing the viewer's attention to his own "equipment" and the fact that, in the 16th and 17th centuries, this game was in effect regarded as a sexual metaphor.

Cruzada Villaamil has identified the site where the game is being played as the area surrounding the Alameda de Osuna neighbourhood of Madrid, although some authors believe it could be a conventional landscape invented by the artist.