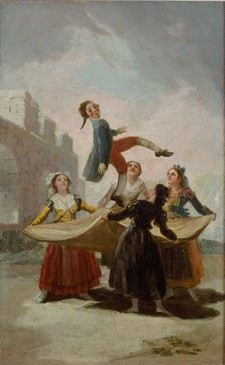 Sketch for the tapestry cartoon The Straw Manikin.

This sketch belonged to Beatriz Sánchez de la Fuente de Lafora, and later to Juan Lafora, in Madrid. In 1935 it became part of the collection of M. Knoedler & Co. Finally, it was in the Henry R. Luce collection, in New York, before being acquired by the Armand Hammer Foundation, based in Los Angeles.

Just like in the cartoon, we see four women amusing themselves by tossing a straw doll up and down in a blanket. However, there are important differences between the two works. Whilst in the cartoon there is a copse of trees framing the women, here we see a crenellated bridge on the left, connecting to the architecture in the sketch for Young Women with Pitchers.

The painting is executed with a light touch, flowing brushstrokes and some impasto details. The outline of the manikin, which appears to be trying to run away, stands out very clearly against the pink-clouded sky behind.

The biggest problem thrown up by this sketch is how to define its exact relationship with the finished cartoon. Another work exists in New York which competes with this one for the status of the authentic sketch for The Straw Manikin. Arnaiz is of the opinion that the similarities between the works makes it difficult to make a definitive decision. However, the writer points out that this appears to be the companion piece to the previously mentioned sketch Young Women with Pitchers, something which is also remarked upon by Morales.